The second accused Abdou Rahman Bah yesterday testified how he and the first accused allegedly conspired to share the sum of five Hundred Thousand dalasis between them.

He made the shocking revelation at the criminal trial involving himself and Oley Sey at the Banjul Magistrates' Court before Magistrate Lamin Goerge.

The duo were alleged to have conspired and stolen the sum of D500, 000, being the money meant for in Abuko.

Continuing his testimony, the 2nd accused Abdou Rahman Bah told the court that on he was at the Ministry of Basic and Secondary Education for the presentation of the sum of D500, 000 donated to the in Abuko by the President of the Republic. He said at the presentation ceremony the for Basic and Secondary Education, on behalf of the President of the Republic, handed the money to the KMC Mayor who in turn handed it over to the Majority Leader Hon Fabakary Tombong Jatta who then gave him the money. He revealed that others present at the presentation ceremony were the 1st accused Oley Sey, the Abuko Alkalo, headmistress of the and some members of the Abuko Village Development Committee. He adduced that after the presentation, before their departure, they were advised by the KMC Mayor to open an account that very day with three signatories.

"As we left the Ministry of Education with the money in my possession, I was about to go in the Mayor's car, when Oley Sey told me to go and meet the chief of protocol. The purpose she said was to thank him and for her to facilitate the remaining 1000 bags of cement and the computers," he stated. "I joined Oley Sey's car and drove near the State House and I was later informed that the chief of protocol was busy," he added.

He said Oley Sey later requested to see the school and they went to the school and he showed her a container, which was brought by his friend in the .

Further testifying, Mr Bah told the court that they went back to and Oley Sey asked him to go to her house to wait for time to meet the chief of protocol. He revealed that while in Oley Sey's house she told him that they should make best use of the money to which he insisted that to make best use of the money was to complete the school. He said Oley Sey was able to convince him that they could hold onto the money until Hon Fabakary Tombong Jatta returned from his overseas trip. "I told Oley Sey that I can't keep the money without putting it in the bank as it was not safe to hold a huge sum of money," he added.

"She told me that she could hold the money and that we could invest it in her business in and later repay the money and share the profit," he adduced.

He said he told Oley Sey that it was not certain. But she convinced him that she could do some marketing strategies so that they could raise some funds for donation as she was in the marketing committee for the APRC during the Roots Homecoming Festival and the Miss Black USA.

He said Oley Sey showed him the participatory ID card during those activities and drafted two donation letters, listed some institutions where those donation letters would be sent.

He said with these marketing strategies, she was able to convince him that they would make money.

"Oley Sey convinced me that the marketing strategies would bring the money and it would cover up of any money use," he stated.

He said he told Oley Sey "you are a nominated member of the National Assembly and being given a car by the President of the Republic, I believe you would not mess me up with this money".

He said after the promise from Oley Sey that they would go to Kanilai failed, he sent her a text message and told her that she was lying to him.

He added that Oley Sey was not happy with that remark.

The case at length was adjourned until . 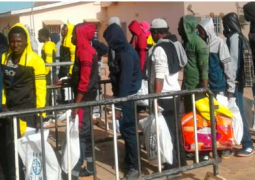