Over one hundred fans of Teranga FM, a community radio station in Sinchu Alagie, Kombo North district of West Coast Region, Saturday celebrated the one-year anniversary of their fans club.

Comprised of various groups of youths in Sinchu Alagie and its surroundings, the club seeks among other objectives to support and sustain the radio station in the best interest of the community and the nation at large.

The club also seeks to bring fans of the radio station closer together to share common views and collective responsibility for the development, protection and promotion of the station.

Speaking at the anniversary celebration held at the premises of Teranga FM radio, Dr Ismaila Ceesay, managing director of the radio station, said the station was established in 2007 and commenced fulltime operation in 2008.

According to Dr Ceesay, the radio station is set up to see how best the community can contribute its quota to national development, knowing very well the importance of communication in society.

“It is against this background that the youths of Sinchu Alagie and its surrounding villages came together with a view to set up this radio station to create awareness for the communities,” Ceesay stated.

In achieving success, he notes, there must be challenges on the way. “As a result, there was a particular time that the radio faced some serious challenges in terms of operational difficulties but thanks to the intervention of some people, whose personal intervention towards the sustainability of the radio is immeasurable,” he said.

He underscored the importance of the radio station to the communities, saying the station is creating a lot of awareness in the society as “it serves as one of the best radio stations” in the country.

“We are all proud of this community radio station in Sinchu Alagie, which has generated a lot of impact in the society,” he added.

Dr Ceesay also commended the Gambia government on behalf of the community for giving them an environment conducive to operate in.

“We are very much grateful to the government for their support in one way or the other and for opening their doors to us,” he said, adding that development is not only about infrastructure but also about building a productive superstructure in society.

Using the services of radio stations is the fastest way of bringing development to society, especially so that most people in the communities are illiterate, he says.

“We are not in for any political party, religion or tribe,” he reaffirmed. “We should not be seen as a threat to anybody. We are here to ensure that our local communities are well sensitised in our development aspirations.”

Dr Ceesay added that they would do everything possible “to ensure that the country is developed”.  “And the best way of doing that is for every patriotic Gambian to contribute his or her quota to national development,” he said. “This is why we are development oriented.”

The Teranga FM boss used the occasion to thank his staff for their high sense of commitment towards the sustainability of the station.

He also called on the private sector - companies and firms - to advertise with them and foster close collaboration with the station.

For her part, Fatou Kinneh Sey, treasurer of the fans club, commended also her colleagues for their high sense of commitment towards helping the radio station. ‘Their efforts in making the event a success is a clear indication that they are committed to raising the flag of the radio station,” she said.

Also speaking at the ceremony, Salifu Ceesay, village alkalo of Sinchu Alagie, thanked members of  the fans club for “what they are doing” and assured them of his support at all times.

He also called on the community to support the youths, who, he said, are very committed to bringing development to the community of Sinchu Alagie and its surroundings.

Alieu Saine, secretary general of the fans club, applauded the youths for their stance in ensuring their aims and objectives are realised. 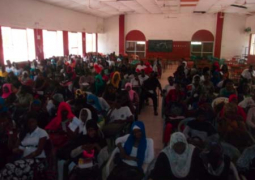