Lamin S. Sanneh, a former teacher at St. Peters Senior Secondary School, recently applied to the Industrial Tribunal to overrule the defendant’s submission to dismiss his claim against his former employer.

The defendant’s counsel, Ms Mendy, on 21 May 2012, in her submission, told the Industrial Tribunal that the plaintiff’s actions called for a summary dismissal without notice.

She submitted, among others issues, that the action by the plaintiff was a serious breach of contract, especially when the plaintiff abandoned the afternoon shift to teach in another school.

Readers would recall that the plaintiff, Lamin S. Sanneh, dragged the school to the tribunal seeking relief for the recovery of D157, 896 being three years, seven months  claim as damages for unlawful termination of his services by the defendant.

In his reply, the plaintiff told the tribunal he left the afternoon shift due to personal reasons.

He adduced that it was the death of his wife on 20 January 2012, leaving behind a six-month-old baby, that resulted into his resignation from the afternoon shift.

“There was no contract for me to teach in the afternoon shift,” he told the tribunal, saying  that when he was appointed in September 2008, as a government teacher, he was deployed to teach in the morning shift.

According to him, during that summer, he asked the principal if he could teach in the afternoon shift, but he told him that when school resumed in September 2009, he was going to put him on double shift.

“This agreement was done verbally,” he revealed, adding: “I taught on double shift for two-and-a-half years.”

However, he said, the death of his wife left him with no option but to leave the afternoon shift.

“I was paid the basic salary for the afternoon shift equal to the morning, but there was no allowance for the afternoon classes,” he added, further adducing that he wrote to the principal on the matter, to which he agreed but demanded a month’s salary from him.

Sanneh told the tribunal that on 1 March, the principal reminded him about the month’s salary he demanded from him to pay.

“I insisted not to pay,” he said, adding that the principal then told him he was going to take a personal decision against him.

He adduced that his termination was signed by the principal, which he also believed was wrongful.

“It was written and signed by the principal without authority. I was not warned, suspended nor demoted prior to this decision,” the former teacher of the defendant claimed.

He further informed the tribunal that at the Labour Department, it was ruled that his termination was wrongful, but the principal objected, to this statement saying, “It was not justifiable.” 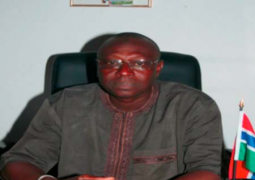