Barely a few months after making a handsome donation to the Rotary Club of Banjul and the University of the Gambia, Trust Bank Gambia Limited yesterday officially handed over the newly-refurbished Leman Street Clinic in to officials of the Ministry of Health and Social Welfare.

The refurbishment, which Trust Bank described as part of its corporate social responsibilities, cost the bank D250, 000.

The bank also renewed its pledge to invest more in the health and other priority sectors identified by the government in the country’s development drive.

“I am happy to witness the handing over today of Leman Street Clinic in its upgraded state,” Matty Bouye, Permanent Secretary at the Ministry of Health in , said at the handing over ceremony.

According to PS Bouye, the provision of health care services is based on comparative need.

“In addition, accessibility and affordability of quality service at point of demand, especially for women and children, the marginalised and underserved, irrespective of political affiliation, are at the centre of health service delivery,” she stated.

It is quite clear, she added, that the gesture from Trust Bank, as well as other support it provided to other heath facilities including Gunjur Health Centre, and the Sanatorium and contribute immensely in the realisation of the objectives of the stated guiding principles.

“This is the second time that this clinic has been refurbished by the same bank, thus ensuring that the infrastructure and the quality are maintained and up to standard. It is, therefore, hoped that the confidence of our clientele will be restored,” PS Bouye further noted.

Through this philanthropic gesture, she adds, the Health ministry is calling for stronger partnership from donors, private sector, NGOs and communities in delivering health services to the population.

PS Bouye highlights some of Trust Bank’s guiding principles, which in her view reflect the respect for human dignity, rights and confidentiality, good management, conductive environment for all to move the agenda of the health sector forward.

She expressed her sincere appreciation and gratitude to Trust Bank on behalf of her ministry for the generosity and foresight in refurbishing the health clinic. She also urged the staff of the clinic to take good care of the structures and the environment to ensure its sustainability.

Oreme Joiner, the general manager banking at Trust Bank, expressed the bank’s unflinching commitment towards a good heath delivery system, adding that this gesture is in line with the bank’s mandate to give back to the people.

“We felt it is our social corporate responsibility to refurbish this clinic and assist the government in ensuring a good health care delivery system,” Mr Joiner stated.

According to him, the clinic was renovated five years ago, during the 22nd July anniversary in 2005.

“We made a visit earlier this year but we found that the renovation was not what we perceived then. We then engaged the ministry through dialogue, and agreed to come back and renovate the whole place,” he added.

He also expressed the bank’s resolve to always provide assistance in key sectors of the country’s economy.

Dodou Nyang marketing manager at the Trust Bank, who chaired the ceremony spoke at length on the importance his bank attaches to health and education, saying that the sky is the limit.

He said the handing over ceremony demonstrated the commitment of Trust Bank to help The Gambia to achieve its development goals. 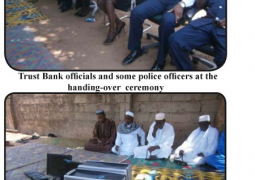 Poor performance of our girls