At least 100 taxi drivers were on a sit down strike yesterday in protest of “the numerous restrictions” they face on the highway in the hands of the traffic police.

The drivers, mostly those who ply Kairaba Avenue and Senegambia to Turntable in Bijilo, said they are now forced by the police to use roads that are not good and in addition, the police frequently arrest and waste their times.

In an interview, one of the protesting drivers, Dawda Sonko, said he and his colleagues were “frustrated by the restrictions without any reason”.

“From American embassy to the Traffic Lights, anywhere you stop, you will be arrested and that is hindering our work,” he said.  “Most of us taxi drivers are working for others and we are asked by those owners of the taxi to give at least a certain amount of money every day.”

Dawda also bemoaned that the police do ask them to be using the ‘back-way’ route to Westfield Corporative garage but the route is not in good condition.

“We want the government to help construct the back-way route or make the police allow us to use Westfield Highway for easy access; the highway is right now one way for commercial vehicles,” he said. “We also need a strong drivers union that will be in charge of our daily welfare and where we can report our complaints.”

Sarjo Sarr, another taxi driver, said they are paying road and income tax as the private cars yet still their movement on the highway is restricted.

“We now find it very difficult to know where to pick or drop passages because almost everywhere on the highway is ‘No parking’ and ‘No stopping’,” he said.

“We could have done like our other brothers to embark on the back-way journey to Europe or look for other means of survival but we are using our skills working towards national development.”

Pa Juldeh Keita, another protesting driver, said they are faced with “so many difficulties”.

“What I don’t always understand is that why are good roads for the private vehicles; and why is it that the police always underrate taxi drivers?” he asked rhetorically.

“We also face so many challenges in the hands of the police on ‘No parking’ and No stopping’; the police should try and differentiate what the two terms means.”

Another taxi driver, Sheriff Jallow, said the issue of ‘No stopping’, ‘No parking’ is a big challenge to the taxi drivers because the police always arrest them in connection to that.

Also, he said, the roads that taxi drivers are asked to use most time are not good.

The protesting drivers said they have lodged a complaint at the Kairaba Police Station and are looking forward to have a dialogue with the Inspector General of Police and the relevant government department in charge of road affairs. 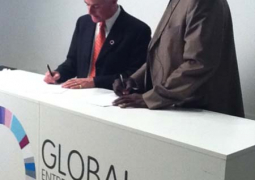