NGOs and the Ministry of Health and Social Welfare in Banjul have issued a resolution on the ”Ebola pandemic in West Africa.” It was the outcome of a consultative meeting held on 22 August 2014. It follows:

We the members of the NGO community in The Gambia under the leadership of TANGO,

Having sought audience with the Ministry of Health and Social Welfare (MoHSW) to discuss the issue of the outbreak of Ebola in neighbouring countries in order to determine the state of preparedness of The Gambia;

Noting that the virus has yet to enter The Gambia and aware that the Gambia Government has increased monitoring of cross border movements in the wake of the outbreak;

Considering Ebola as a national security issue for which all sectors of society in the public, private and civil society must contribute ideas, resources and efforts to prevent and contain the virus;

Having expressed our appreciation with the Ministry of Health and Social Welfare in the highly impressive manner and efforts being undertaken so far to protect the citizenry from Ebola such as the provision of necessary protective gears and other preventive resources to health and security teams to handle any Ebola case, and the establishment of quarantine sites in Banjul and Basse with plans to have others in hospitals in Farafeni and Bwiam;

Appreciating that the Ministry of Health and Social Welfare has an established communication strategy and committee to direct and conduct the public awareness campaigns, which is being carried out quite intensively.

The Ministry informed NGOs that they have reached over 210 TAC members, 350 Red Cross volunteers, 75 Cluster Monitors, 875 communities, chiefs, and Alkalolu,

More other interventions are ongoing with other stakeholders such as the Gambia Tourism Board, community and private radio stations in mainly in the URR region because of its proximity to Guinea. There are plans to develop audio and video spots in all the national languages, as well as using cellular SMS text messages on Ebola.

Religious leaders are also considered major targets given their crucial role in the socio-cultural domain. There are more plans to train extension workers on rumour management and crisis communication.

The role of traditional healers has been recognized and they are targeted to be trained. Young people in mainly the Greater Banjul Area are also being targeted in collaboration with the online social media group, Fong 4 Life.

A Facebook page on Ebola will be developed to reach out to the youth. A caravan campaign is being planned, while trainings for ambulance drivers, mortuary attendants among other health workers are being planned;

Realizing that these interventions require immense resources, which are in short supply at the Ministry of Health and Social Welfare;

Acknowledging the support already received from the UN system and other bilateral partners in support of preparations for the containment of Ebola;

Aware of, and concerned of common socio-cultural practices such as handshakes, naming and burial ceremonies, and other interactions including the movement of people from one place to another, and the practice of hunting and bush meat consumption all of which provide opportunity for the virus to transmit;

Concerned that schools are due to open shortly which increases the level of social interactions and movements;

Concerned that fish landing sites from Kartong to Banjul are major transit points yet remain unattended by health and security services;

Concerned that the weekly lumo continues to take place in various locations in which hundreds of people from diverse places converge without any presence of health facilities to monitor and immediately handle any cases;

Concerned that the international media releases only general information that Ebola is in West Africa, which potentially creates the impression that the virus exists in each and every country.

TANGO wishes to highlight and reassures the international community that even though the Gambia is within the affected region, yet the country remains a safe place with robust preparations in place to handle any Ebola case;

Have agreed on the following resolutions in the fight against Ebola:

1. Gambia must invest heavily in prevention methods since the virus has not yet entered the country;

2. Gambia must learn from the experiences of the affected countries to ensure that all necessary measures are taken to prevent the transmission of the virus into and within the country;

3. MOHSW must pay special attention to cross border movements between Gambia, Senegal and Guinea Bissau given that these countries border the main affected regions;

4. Data collection on cross border entry and exit must be well conducted and coordinated with neighbouring countries to further enable the tracking of the virus;

5. There is an urgent need to create a National Ebola Emergency Fund to enable all i.e. individuals, institutions and organizations in all sectors to contribute resources to the fight against Ebola;

6. NGOs are encouraged to provide resources to the MOHSW such as vehicles among others to enable it to carry out its interventions such as communication and social mobilization consistently and extensively;

7. Major national events such as the forthcoming NAYCONF as well as political rallies and other gatherings by any organization or in communities must also be utilized as avenues to further raise public awareness about Ebola;

8. While the contribution of the public and private media has been recognized, there is need for GRTS and the community and private radio stations to provide more air time for dissemination of Ebola messages in fulfillment of their corporate social responsibility;

9. There is the need to intensify efforts in raising awareness of communities about the mode of transmission of the virus. This will also ensure that schools and institutions have sanitizers/detergents within their premises;

10. There is need for the MOHSW to use all forms of media channels and languages to disseminate information on Ebola so that all citizens have access to the right information;

11. Health workers must respond immediately to suspected cases when reported to health facilities;

12. Communities must be sensitized and encouraged not to hide suspected family members with symptoms of Ebola, but to report such cases immediately to health facilities;

13. There is a need to set up a telephone hotline for Ebola;

14. Teachers must be trained on how to monitor school children;

16. MOHSW is encouraged to share all information with NGOs to also disseminate further to communities in which they work;

17. There is need to conduct simulation exercises to ensure that the preparedness of the relevant institutions are intact in the case of an Ebola case;

18. MOHSW should engage with parastatals and private companies to contribute to the fight against Ebola.

TANGO and the Ministry of Health and Social Welfare shall continue to share information and plan future engagements as and when necessary. 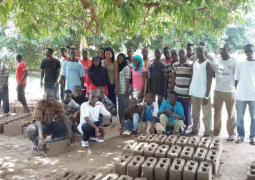