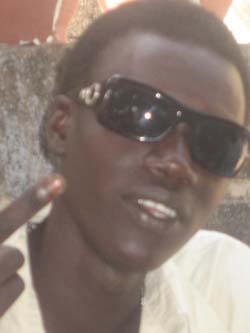 A young Gambian musician Tamsir Samba, aka Tam50, born in Banjul and residing in Bakoteh, is the artiste behind a popular song done  in Wollof and English called “Monor”.

This is a song cherished and loved by the younger generation as it is a term used in the ghettos.

Briefing entertainment recently, Tam50 said he started music in 2007 and recorded his first single called “Chono life’ in 2008. He went on to say that he is working on his first album and that he has released a mixed tape, which is hitting the market.

“The song ‘Monor’is a street language, which I reformed to a slogan and is all about being confident about yourself and accept that nothing in life is easy,” he said.

Tam50 added that he has also travelled to Senegal to promote his music and to learn from other artistes there as well, saying he has gone on a countrywide tour to the interior of the country.

“There is improvement in the music industry unlike the previous years because people are responding to it,” he said.

“I have a lots of fan clubs throughout the country, he said, calling on all and sundry to expect his album in 2012.

The problem he is facing is what every artist in The Gambia is facing right now, he noted, saying the artiste needs proper promotion and a contact link between the media and artistes, while calling on fellow artistes to keep on the good job.

A helping hand from the public, which is highly solicited, could take Tam50 to higher heights in his music career. Anyone who could render support to the young artiste can dial the following number:  0220 -3814661.