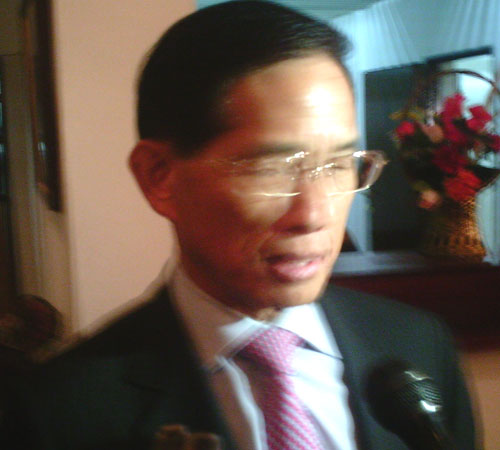 The Foreign Minister of the Republic of China on Taiwan, H. E. Francisco H.L Ou arrived in The Gambia yesterday for a four-day official visit with a six man delegation, which include Director of Taiwan International Co-operation Development Fund (ICDF) and Director of African Affairs.

He was met at the foot of the aircraft by his Gambian counterpart Dr. Omar Alieu Touray.

Also present at the airport to receive the minister were the Taiwanese Ambassador to The Gambia Richard Shih, staff of the Taiwanese Embassy and other Taiwanese nationals in the country.

The Gambian welcoming party consisted of the Mayors of KMC and Banjul as well as the governor of the Western Region, Paramount Chief and other senior government officials. Cultural groups were also in attendance to provide entertainment.

Speaking to reporters shortly upon arrival Mr. Ou affirmed that the co-operation between the two countries would be strengthened.

The foreign minister was yesterday in attendance at a welcome dinner held by his Gambian counterpart.

The Chief Taiwanese diplomat will today hold separate meetings with the Secretary of State for Foreign Affairs, the Vice President and H. E. President Jammeh. Later in the day he will visit the Taiwanese Embassy in Kanifing.