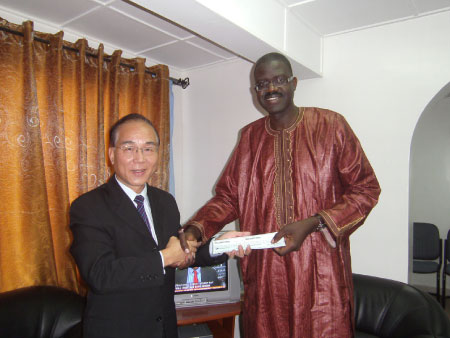 The Taiwanese ambassador to The Gambia, H.E. Samuel Chen, yesterday presented two cheques worth over twenty-two million dalasis to the Gambia government at a ceremony held in Banjul.

The Hon. Minister of Presidential Affairs and Secretary General of the Office of the President Dr Njogu Bah received, on behalf of the Government of The Gambia from H.E. Samuel Chen, Ambassador of the Republic of China (Taiwan), a cheque for US$545,939.

The money is the 2nd payment for the rehabilitation of the old police line in Banjul.

At the same ceremony, another cheque valued at US$228,683 was also presented to support the Presidents’ Empowerment of Girls’ Education Project (PEGEP).

The two donations from the Ambassador of the Republic of China (Taiwan) is totally equivalent to D22,464,038.

Hon. Minister Dr Bah lauded the gesture and commended the Taiwanese government for its continued support to The Gambia.

He said the assistance would contribute immensely towards the promotion of the welfare of the police force as well as girls’ education.

Presenting the two cheques, the Taiwanese Ambassador to The Gambia H.E. Samuel Chen, acknowledged the strong bilateral cooperation between The Gambia and Taiwan.

The donation reflects Taiwan’s commitment to the development of The Gambia, he said, reiterating his resolve to further consolidate ties between the two countries. 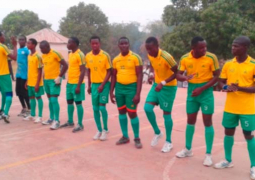