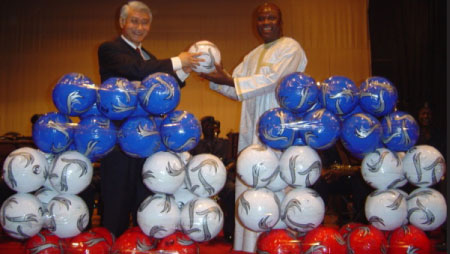 The ambassador of the republic of on , Richard Shih, on Monday donated 100 footballs to the Ministry of Youth and Sports.

The balls were presented at the Kairaba Beach Hotel in Kololi during a reception marking the centennial national day of the republic of on .

The balls, which were displayed during the reception, were first used for decoration symbolizing the ROC’s 100 years of nationhood.

At the end of the reception, ambassador Shih called on Hon. Sheriff Gomez, Minister of Youth and Sports, to take delivery of the new balls.

“I have the pleasure to present to you 100 brand new footballs,” said ambassador Shih.

In receiving the balls, Minister Gomez thanked ambassador Shih for the donation.

The balls are meant to boost the game of football in the country at a time when many Gambian scoccer fans are least happy with Gambian football.

T.K. Motors in conflict with the law