A two-week cultural exchange program by youth ambassadors from the National Pin-tung University of Technology in Taiwan and the Gambia ended on Friday at the Baobab Holiday resort in Kololi.

The seven-member Taiwanese delegation, headed by a professor, held demonstrations on Taiwanese culture such as a folk song and dance, paper making, Chinese calligraphy, local cuisine, Chinese martial art, as well as learn about Gambian and African culture from Gambian youths.

Speaking on the occasion, Taiwanese Ambassador to the Gambia, Richard Shih, expressed gratitude to both youth ambassadors for such a seminar to share their experiences. He revealed that this was the first event ever organised by youths from the Chinese elite to learn about Gambian culture. This, he added, seeks to promote the cultural understanding between the people of both countries.

Ambassador Shih reiterated the fact that The Gambia and Taiwan are not only partners, but brothers and sisters. He said that he is looking for further cultural understanding between the two countries in order for their relationship to move form strength to strength.

Dr. Momodou Tangara, Minister of Foreign Affairs underscored the importance of the program, noting that Taiwan has a very strong culture, especially in science and technology.

He urged the youths to preserve and value culture as it is very meaningful. Looking at cultures, he said, one cannot just oppose them hence there is a lot of similarities.

He expressed hope that the relationship will not stop here, but will be nurtured to go further, hence each of the youths are now enriched with each others culture.

Also speaking earlier, the Minister of Youths and Sports, Sheriff Gomez, stated that there exists a very important diplomatic relationship between the sister countries. "It has always been one in which the two countries benefit from each other not only to develop our countries, but the emancipation of its people internationally and globally," he said. Madi Jatta, deputy Permanent Secretary for Higher Education, Research, Science and Technology, also spoke at the event.

At the end of the event, certificates were awarded to outstanding youth representatives. 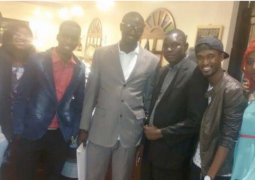