The school, which was founded in 1988, has produced outstanding students who are serving in all sectors of national development, and has continued to demonstrate its commitment to quality education.

The colourful celebration initiated under the current principal, Abubakarr Nyabally, who assumed office last year is the first of its kind since the inception of the school. The event was graced by the governor of the region, Lamin Darboe, principals of sister schools, teachers, board members, parents, present and past students, and well-wishers.

In his brief welcome remarks, Peter J. Braima, vice principal of the school, thanked all those who attended the celebration, which he said is a great initiative by the principal.

According to him, many principals have passed through the school, but this was the first time that the school celebrated its foundation day. He commended the principal for his foresight, commitment, and determination t move the school forward.

“Tahir senior school is on the move, and will continue to move”, he stated.

Oustaz Lukman on behalf of the Ahmadiyya Jamaat said the initiative by the principal to celebrate the school’s foundation day is a great achievement, while applauding him for his leadership skills.

He, therefore, urged the students to take their education seriously so as to realize the potentials that God has given them.

“Get higher education in order to be able to serve yourself and your country better. The education that you get today will determine the future of this country”.

According to him, it is mandatory for everyone to get educated, while urging them to make the best use of the facilities available at the school.

Also addressing the students was Lamin Darboe, governor of LRR, who said the celebration was an important occasion in the history of the school, while urging the students to be more focused and determined in their quest to achieve good results.

According to him, teachers have a role to play, but equally the students have a greater role to play.

“As students, you need to give more time to your books and less time to social events. You should make the best use of the opportunities created by the government”.

Governor Darboe stressed the need for discipline among the students, advising them that education cannot go in the absence of discipline, and urged them to have high respect for teachers and the school’s rules and regulation.

Governor Darboe, who was full of praises for the school principal, said the school has registered tremendous achievements, both in the academic field and sports, under the current administration.

“You the students should always aim high, and be cautious of negative peer influence. You should know that you are the cream of the nation and future leaders of this country.”

He concluded by wishing the school a happy celebration, while looking forward to the ‘Silver Jubilee’ celebration come next year.

“The school is moving forward, and we are more committed than ever to mould the students to be an asset in society”, Nyabally said, adding that the school has registered remarkable achievements. Among them is that the school now has an upper basic school.

However, he said the progress and achievements would not have been possible without the support being receive from sister Ahamadiyya schools, teachers, students, community, board members, the office of The Governor, Ahamdiyya Jamaat, and Ministry of Basic and Secondary Education, while thanking them all for their unwavering support.

According to him, the school has continued to register great results at WASSCE, thanks to what he described as collective efforts between the teachers and students, noting that there is no good and bad school, but it all boils down to commitment and determination of the students.

“Tahir senior school is a school of difference where students are doing very well, and by the grace of God, we will celebrate our Silver Jubilee next year.

“I will at this juncture like to say a big thanks to the President of the Republic, who has education among his top priorities and on behalf of the school administration and students, I again thank him for the handsome donation he made to the school during his tour last year”.

Highlighting some of the concerns at the school despite the numerous achievements being registered, Principal Nyabally said the school is still without an assembly hall, which he said is a big concern for both the administration and students, while appealing for support to build an assembly hall at the school.

Speaking to this reporter shortly after the celebration, Alhagi Jassey, head boy of the school studying Science, said the celebration means a lot to the students, in the sense that many students have passed through the school but were not fortunate to have such. He, therefore, thanked the principal for the good initiative, while urging the students to be very serious with their education.

The celebration wrapped-up with a quiz competition, drama, and recitation of poems. 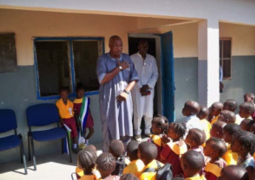 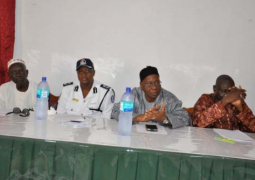