The UN yesterday launched a new report on the conflict in Syria, stating that more than 60,000 people have been killed since the uprising began in March 2011.

A new study commissioned by UN human rights commissioner Navi Pillay collated data from seven different sources, and concluded that there had been 59,648 deaths until November 2012.

Ms Pillay said the figure would now have risen above 60,000 and described the bloodshed as “truly shocking”. Syrian opposition groups had previously estimated 45,000 people killed.

The study was released hours after a petrol station near Damascus was hit in an air-strike.

The missile attack apparently sparked a huge explosion in which up to 70 people died, according to activists, in one of the deadliest incidents of the uprising.

The report is very worrying, and shows the gravity of the continuing shelling in Syria, thus making it a serious cause for concern.

As stated in this and other pages, the situation in Syria requires the quick intervention of the international community.

While the international community continues to deliberate on what steps to take against the Assad regime, the people of Syria, especially women and children, are dying continuously.

We are reiterating our call on the international community to put aside their various individual interests, and show the Assad regime the exit door.

The global community owes the Syrian people an obligation to ensure that Assad stops killing his own people.

The on-going bombardment and shelling going on in Damascus and other parts of Syria is unacceptable, and must stop now.

We call on the international community to keep pushing for all available avenues in order to bring peace to Syria.

The people of Syria have suffered a lot since the start of the conflict.

For the Assad regime, we must repeat that it is time to leave, as the massive death toll and destruction of your country by the conflict is enough.

The international community, especially the United Nations Security Council, is not doing justice to the Syrian people.

The continued killing of innocent and armless people in Syria must stop now!

We are seriously concerned about the plight of our Syrian brothers and sisters, who continue to lose their lives in their struggle for freedom, and do hope that the New Year will bring change in Syria. 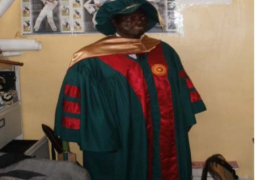