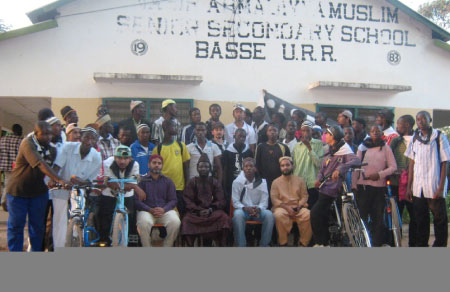 The convention took place at the Nasir Ahmadiyya Muslim Senior Secondary School in Basse in the Upper River Region.

The ceremony was graced by the Regional Governor of URR, deputy governor CRR, Regional Police Commissioner, National Assembly member for Basse and other local dignitaries.

Baba F. Trawally, the Amir of the Ahmadiyya Muslim Jama’at The Gambia, told the gathering that the holy prophet Mumammed Mustafa (SAW) possesses great qualities because he was perfect in his relationship with Allah.

The Amir added that every moment of the life of the prophet was spent in the cause of Allah the Almighty, which was why God instructed him to announce to mankind that his worship, sacrifices, life and death were all for Allah the Almighty alone.

Amir Trawally added that his morals are beyond reproach and he is the professor of all excellent morals.

He noted that the prophet was humble that he could not sometimes be distinguished from his companions, because he would deprive himself of food to satisfy the hunger of others.

“For the sake of the oppressed he was ready to fight until the last drop of water remained in the ocean. He liberated women from the servitude of dark age,” said the Amir.

He further advised the Kuddam that they should live like the youths of the early days of Islam who sacrificed their lives on the path of Allah the Almighty and his messenger (SAW).

According to him, the Kuddams are the green branches of the tree of the holy prophet, stating that in the centenary of the Khilafat, they have all pledged to ensure that the flag of Islam and the honour of the holy prophet Muhammed (SAW) is established in every corner of the earth.

Omar Khan, governor of URR, saluted all the cyclists who cycled from Barra to Basse, within three days to participate in the convention.

He said the youth are the future leaders of any nation, he said, advising them to be disciplined that they cannot archive anything in the absence of discipline and hard work.

Addressing the gathering in his opening and closing remarks, the Sadr (President) of the Ahmadiyya Muslim Male Youth Association emphasised the need for obedience to the Holy Prophet of Islam (peace and blessings of Allah be upon him).

He said success, peace and tranquility are dependent on obedience to him. The Prophet (saw) is the link between mankind and Allah the Almighty.

According to him, Allah the Almighty says in the Holy Qur’an that if mankind desires to attain His love and pleasure, they must manifest unconditional obedience to the Prophet (saw).

“If he is not obeyed then the burden of disobedience shall lie on us because he had fulfilled his duty of the plain and clear delivery of the Message of Allah the Almighty,” he stressed.

He exhorted the Ahmadi youths to be scions of righteousness, reminding them of the instruction of Hadrat Mirza Ghulam Ahmad, founder of the Ahmadiyya Muslim Jama’at.

He said the path to God is an uphill journey and man must never be satisfied with his achievements. 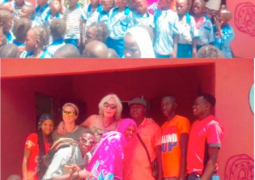