Villagers of Jarjari village in the North Bank Region will soon benefit from the construction of a modern nursery school, less than a year after their mud-brick nursery school was washed away by heavy rains.

On arrival at the village discussions were held with the village elders and Mr. Morgan, an engineer himself, measured the area and got all the necessary information he wanted. He also visited the village vegetable garden. The story goes on in Mr. Morgan’s words:

"Last year, I decided to do something memorable in 2010, as I will be 60 in August. I spoke to a number of fantastic charities doing work in the UK and overseas, and reached a point where I found it impossible to make a decision as to who to support as they were all doing great work and all would have benefited from my help.

"In December, I went to the Gambia for a holiday to escape the winter weather. I had planned to try the Gambia for some time as it has winter sun and is only 6 hours away. Gina was busy 'getting ready for Xmas' so I decided to go on my own. A friend of mine based in Fleet (Steve Gotting) ships equipment to a number of African countries including the Gambia. Whilst working out there he got involved with shipping unwanted equipment from the UK to a clinic and some of the hospitals.

"I told Steve I was going to the Gambia, and that I would like to visit the clinic to see what he had been doing. He told me it was a long way from the hotel I was staying at, and that there was not much to see when I get there. He said I would have to get a ferry across the river, and it would take a day of my holiday. He knows the country well, so I accepted his advice. This was a big disappointment as I was looking forward to seeing the clinic.

"Steve's agent in the Gambia (Bakary) met me at the airport, and showed me around and took me fishing one day. Whilst fishing, Bakary told me that his family originated from the northern province (north of the River Gambia). He told me about his family's village called Jajari where their nursery school (made of mud bricks) had been washed away. The whole village was devastated as they see education as vital to improving their lives.

I said I would be happy to look at the situation, to see if there was something I could do to help. Steve's clinic was only 5 km from Jarjari so I would be able to visit there as well.

"As we approached the village, ahead of us was a very large mango tree under which sat 25 men (the elders of the village). I had expected to meet one or two people for a chat about their school!

"These people have absolutely nothing, but they were committed to trying to create something for the generations of the future. They were desperate to provide education for the children of the village, but could see no way of doing this as they did not have the energy to build another school of mud, that may get washed away again or the resources to build a brick building. (Sometimes when you are searching for something and you can't find it, the best thing you can do is to stop looking and wait until the 'something' finds you!)

"The enthusiasm and total commitment of the whole village to build the school was the 'something' I had been looking for. The people of The Gambia are very friendly and peaceful. They never complain and accept what life has given them. The men harvest the rice crops once a year and sell it for £400 while the women work in the vegetable gardens (allotments) to help feed the family. The women draw water from wells 15ft deep by hand (bucket on the end of a rope - no luxury of a handpump in Jarjari!) and irrigate their vegetable garden bucket by bucket. When I left the vegetable garden it was 7 pm and they were still working.

"When they finish work they have a 2 km walk back to the village - and then make dinner for the family! Life is tough in the northern region of The Gambia. With all the problems they have, their positive attitude is a lesson to us all. When I got home I explained to my wife, Gina, what I planned to do, and her reaction was one of resignation and support - I had spent the past 30 years building businesses so why not build a school in Africa!

My plan was to quietly get on with the job without any fuss. This all changed when I received an email from Heather, our receptionist in Farnham. I was in the office waiting for a meeting, and Heather asked me about my holiday. She was very interested in Africa, so I told her briefly what I was doing, and thought nothing of it. The next day I received an email from Heather saying that her husband was an electrician and that he was prepared to go to the Gambia for 2 weeks (all at his own expense) to carry out the electrical installation work.

He had always wanted to get involved with a project like this, and the Jarjari school had given him the opportunity. I was delighted, and a little overwhelmed. I was just going to get on with building a school, and had not considered that other people might want to get involved, and that the project could provide the opportunity for other people to fulfil a desire to be part of creating something like the school.

Since Heather's email, things have gathered pace. The directors of Morgan Clark have agreed to fund a major part of the costs, and we have set up the Morgan Clark Foundation. Beth and Nick have offered to work on the project (in the UK and in The Gambia) - Nick flies out on the 12th to carry out a survey and prepare site plans. Annie is going to look after the PR for the project. PKF and Maitland Walker are going to provide accountancy and legal support. Corporate Wear (run by my niece) is going to supply school uniforms.

An electrical supplier (a friend of Steve's), said he was going to clear out his warehouse and sell the cabling for copper scrap. He is now going to give it to us for the school installation, and one of the charities currently running schools in The Gambia has offered to provide all the furniture for the school.

The one overriding principle I have for what we are doing is that I do not want to take a penny from another charity. I do not want anyone to stop giving to their local, national or whatever charity they do in order to give something to the Jarjari project.

I will continue to support various charities in the UK, as I have in the past. I had a meeting in Jarjari (with Gina) on the 23d February and the project officially began on that day with the planting of a mango, orange and avocado tree.

As some people know about the above project, and others a little or nothing, I thought I should give everyone a brief overview. 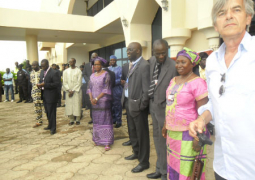 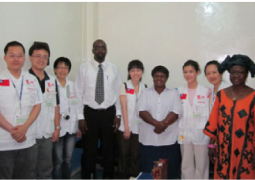