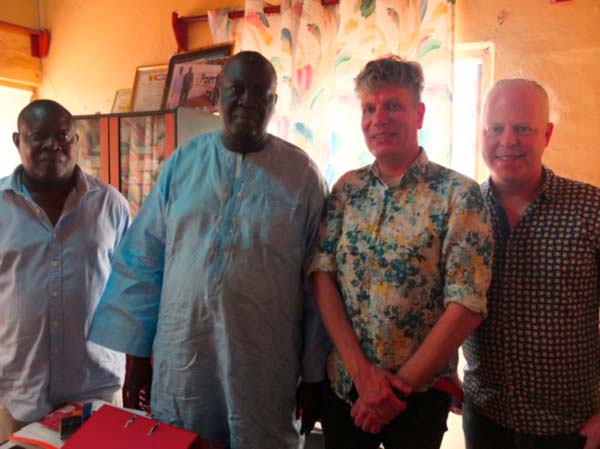 Micke Svedemar, responsible for external relations at the School of Arts and Communication, Malmo University in Sweden, has said they want to establish a partnership with media houses in The Gambia to bring students from the two countries together through internship.

He spoke yesterday at The Point offices, following a meeting with the paper’s management.

Mr Svedemar, who is responsible for internship at his institute, said one part of the partnership will be to try to create a platform for students to come to The Gambia for internship in one or two organisations in the country.

Talking about the media, he said a free press is very important and his students would learn from their Gambian counterparts what it is like going from a dictatorship to a free country, and how that affects the people, the press, and those connected to government in The Gambia.

He said lack of a free press in a country can have serious effects on the ability of people and journalists to do great things, as well as damage the image of a country.

He pointed out that a journalist must have a critical view, and it is important to have journalists who are critical of government and issues of governance, because “power is a very dangerous tool and can corrupt”.

Nils G. Indahl, a journalism trainer, who is also an Adjunct Professor at the University of Copenhagen, said 14 years ago they visited The Gambia to start some projects in computer science and journalism, but because of the political condition then they decided to postpone those projects.

He said with the new government in The Gambia, they would come back to the country to deal with the media and assess the needs of the industry.

As a political scientist, he has foreseen that the next 2 to 3 years will be very important for the future of The Gambia; hence he would like to contribute to that development in some way.

Mr Indahl, who has trained a good number of African students in Germany, said he intends to put up a team of people that can assist Gambian journalists to migrate from print journalism to digital journalism.

“If you want to have a free society, you need to have free citizens that can access free information,” he said, adding that the media has a major role to play in the future of the new Gambia.

The Point newspaper’s co-publisher, Pap Saine, expressed delight about the visit, saying in his earlier discussion with the visiting educators he had briefed them that since President Barrow took over the reins of power, things had improved “tremendously in terms of press freedom” in The Gambia.

He hopes to have a very good collaboration with the Swedish visiting educators in terms of training, as well as in maintaining the bilateral relationship between The Point and the university and Swedish educators.

He described their meeting as fruitful and would like to work with them to ensure it yields dividends, especially on getting Swedish journalists to visit The Gambia for internship at The Point, and The Point and other Gambian journalists to do the same in Sweden.

“This will help Gambian journalists to greatly improve themselves and journalism in the country,” Mr Saine said.