The ten-team league championship, which saw GPA winning the coveted title last year following their demotion from the country's top flight football in 2008 will begin on Wednesday 3rd February when Serrekunda East entertain Lamin FC in what is expected to be a highly interesting and captivating encounter, at the Brikama Box Bar Mini-stadium.

The same day will feature two other teams when Banjul United and Flamenins travel to Serrekunda East to battle it out for their first vital points in the race for another Second Division league title.

Serrekunda United will rub shoulders with Nema United in the last game on Wednesday, while the relegated Africell FC will open their campaign, aimed at regaining their place back to the premier tier football when they travel to face Tallinding United at the Serrekunda East Mini-stadium.

The last game in Week One fixtures will feature last year's FA cup champions Young Africans, who are expected to put in a spectacular performance, which saw them knocking out some of the big name teams in the FA cup championship when they lock horns with Latrikunda United on Thursday 4th February, at the Father Gough Sports Complex in Manjai.

Pointsport will bring you the rest of the fixtures in our subsequent edition. 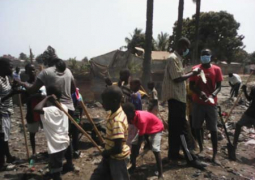