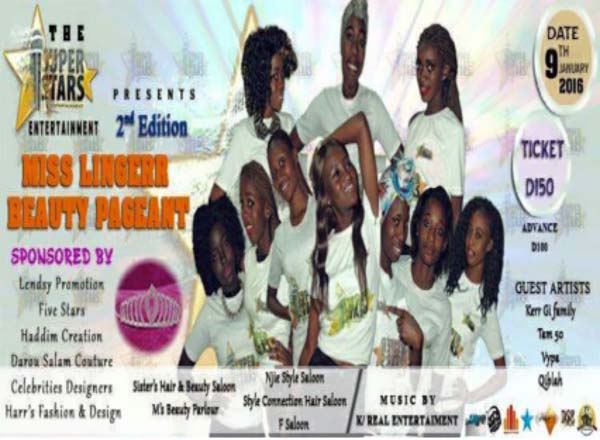 Come 9 January 2016, the Father Farrel hall is expected to rise above nature as Miss Lingerr Beauty Pageant will hold its second edition, an event organized by Superstars Entertainment.

Superstars Entertainment is a group of young Gambians working towards the development of the country.

The aim and objective of the group is to promote and support young Gambians talented in the area of music, beauty pageant as well as to promote unity within the young ones.

The group resides in Kololi, and they have an annual event to promote the beauty of Black Africa, which is called Miss Lingerr a wollof word meaning Burr meaning (Queen).

The group is manage by young Gambians with different skills of art work and other social responsibilities.

The promoter and event organizer, ModouNjies, who is the CEO of the group and also a fashion designer, said the aims and objectives of his entertainment  group include to support young talented Gambians in the area of music and beauty pageants.

Ten contestants from different areas, including drama, singing and dancing are to contest on the day, he said, adding that they also wrote to some companies for support, but they could not get any response from any of them.

According to Njie, a cash amount of D10,000 would be given to the first, second and third winners including other prizes.

He added that the event is not only about competing or gaining prizes, but also to promote culture.