Rockers FC have been crowned champions of the 2010 Marakissa league, after their 1-0 victory over Young Stars FC in a final played at the Marakissa playing field.

The Saturday final encounter was witnessed by a large crowd from Marakissa and its environs. The match was dominated by Young Stars FC, who created numerous goal-scoring opportunities but wasted them.

Rockers opened the scoring through striker Salieu Badjie in the 20th minute of the game after capitalising on Young Stars FC's defensive blunders throughout the first half.

Upon resumption of the second half, Young Stars FC picked up shape and mounted heavy pressure on Rockers FC's defence line bringing them close to levelling the score in the 55th, 62nd and 77th minutes of the game when striker Ebrima Jarju got three clear goal-scoring opportunities but were denied by Rockers FC's goalkeeper Faburama Jammeh, thus the game ended 1-0 in favour of Rockers FC.

As champions, Rockers FC were given a giant trophy and a cash prize of D5,000, while Young Stars FC received D3,000 as the runners up.

The match was witnessed by the head of the newly promoted first division side Young Africans, Amat Cham, secretary-general of the Serrekunda Sports Development Organisation, who also doubles as the head coach of Tallinding United and sports journalists from different media houses. 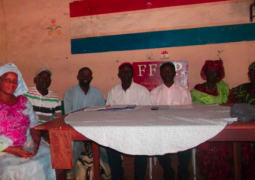