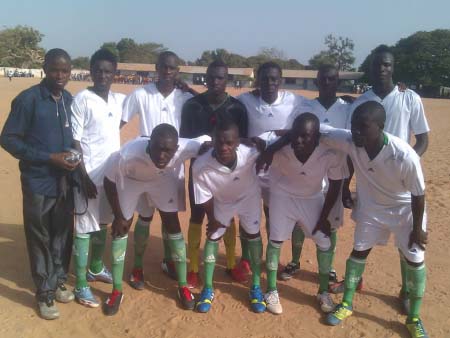 Westham Football Club in Essau village have defeated Kalikassa of Kanuma village by seven goals to six in a post-match penalty shootout to claim the title of the tournament played at the Essau Lower Basic School football pitch.

The local football tournament, commonly known as ‘Nawettan’, organized by the Essau Youths and Sports Development Committee, attracted 16 teams from Essau and surrounding villages like Barra, Mayamba and Kanuma.

In the Saturday final, attended by the Lower Nuimi parliamentarian Misba Hydara, showed both the youngsters of Essau, who are most suited for Under 17 for their age, and the visiting team from Kanuma displaying wonderful skills in football through the intelligible control of the ball.

Jalikassa, who have played the tournament for at least a decade, scored the first goal of the game 28 minutes of the first half.

It was a penalty awarded to the team for a handball by one of the players of Westham in their own yard.The penalty was scored by the captain of Jalikassa, Lamin Nyan.

The youngsters of Essau did all they could to level the score but it was fruitless, despite the home support.The team could not take advantage of the numerous goal-scoring opportunities created in the first half, which ended one nil in favour of the visiting team of Kanuma.

The young boys came from the dressing room more eager to find the back of Jalikassa net. They made intermittently wonderful inter-change of passes, coming close on many occasions, but the visiting team put too much fight to stop them from scoring.

The boys still determined, went all out to capitalise on any slightest opportunity they could get.It paid dividend.One of Westham forwards, Lamin Jammeh, dribbled pass the Jalikasa defenders and skillfully dribbled pass the goalkeeper, who deliberately pulled the forward player down.

The team was penalised for this.The referee awarded Westham a penalty and it was scored by Lamin Jammeh aka Mboye dindin himself.

This leveled the score line.Both teams became more eager to score in regular time but their efforts paid little or no dividend as the match ended in a stalemate – one all.

In the ensuing post-match penalty, the 7th spot-kicker for Jalikassa took the ball over the bar and youngsters scored, giving them a win.

In a post-match interview, the coach of Westham, Muhammad Sankareh, said: “I am very happy today because my team brought victory to Essau. We don’t take this final as Westham against Jalikassa of Kanuma. We see it as Essau vs Kanuma because for the past two years all the cups left Essau (won by teams out of Essau).

“This is why this year when we qualified for the final, we see it as a do or die thing.We see it as responsibility on us to make sure that the trophy stays in Essau.”

He said that since after defeating Dego FC (another Essau team) one goal to nil in the semi-final about one month ago, they had been preparing for the final.

“We even did some spiritual preparation, to protect our footballers because this is African football. So, we did not leave anything out as far as preparing for this final is concerned. We did everything to make sure that we play safely and take the cup, and we are finally glad we did,” Coach Sankareh said.

The opponent coach Sheikh Hydara, whose side (Jalikassa) defeated Jambarr of Mayamba village by one goal to nil in the semis, could not be seen for the post-match interview.

He left in anger and disappointment as soon as his team received their runners-up prize.

The chairman of the Essau Youths and Sports Development Committee, Yankuba Marong, congratulated the community of Essau and the environs for their cooperation and understanding, which led to the success of the competition.

“They have been very cooperative with us since day one; that is what led to the very success of this competition compared to the previous years’,” he said.

For the past couple of years, hardly is a football final played in Essau without chaos and disorder but this one was played trouble-free.

Mr Marong explained:“When we came in as a committee, we started with capacity building and we don’t confine ourselves to the committee itself; we spread our tentacles.

We went as far as having sessions with coaches and fan clubs, meaning most of the stakeholders of the tournament have an understanding that football is all about building unity, so we should maintain unity throughout.The training is one of the things that helped us to see this (tournament) trouble-free.”

Transport union case: Witness says ‘nothing happened’ between him and accused persons