The first batch of 25 students who were in Taiwan for four years pursing a degree course in petroleum elite program finally return to The Gambia last Sunday.

In receiving the students at a welcoming ceremony held the airport, Mr. Ousman Jammeh the Secretary of State for Energy hailed the graduates for overcoming all the challenges they might have faced while in Taiwan. "You have been armed with a lot of skills and all of us are proud of your achievements," he said. He congratulated them for fulfilling their mission in Taipei. "We look forward to you joining the workforce and contributing towards national development," he added.

For his part, the Taiwanese ambassador to The Gambia, Richard Shih started by saying, "welcome from your second home back to your first home". He congratulated the students for their excellent performance in Taiwan saying, "I strongly believe that four years hard work in Taiwan will reward you the best future in your coming careers." He said that now is the time for the students to harvest the fruit of their hard work. "I ask you after four years in Taiwan to be ambassadors of Taiwan to The Gambia," he said.

Momodou Badgie, Managing Director Gambia national Petroleum Company (GNPC), thanked all those who contributed to the success of the students in Taiwan.

He expressed special thanks to President Jammeh, the former Taiwanese ambassador Dr. Patrick Chang and the Taiwanese government.

Isatou Jallow, a graduate, on behalf of her team thanked all those who supported them while in Taiwan.

Present at the airport to receive the students were Mr. Ebrima Camara permanent secretary at the Office of the President, Mr.Fafa Sanyang, Commissioner of petroleum, Abdoulie Sallah Secretary to the Cabinet and family members. 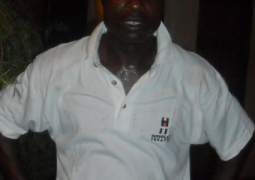