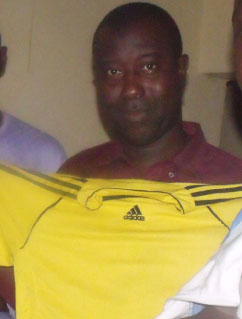 The brief family meeting held at the team’s training centre at Cape Point, was part of the Executive’s efforts at creating more familiarity between them and  the players as Biko gear up for another GFA first division league championship due to commence next month.

The meeting was also intended to strengthen the cordial relationship that continues to exist between players and executive members.

The delegation was led by its 1st vice-president Junkung Drammeh, who dilated on some of the significant issues geared towards maintaining strong relations among players and executive committee members.

“The ultimate aim of holding this meeting is to avail ourselves  the golden opportunity of knowing each other (the players and executive) much better as we are all working towards achieving one objective within the club," the club’s 1st vice president told players during his short speech.

The General Secretary of Steve Biko FC, Omar Gassama, spoke at length on various topics all gearing towards maintaining and cementing the much talked about relations between the players and the executive, saying “there cannot be an executive when there is no club in place”.

“The purpose of this gathering,” according to Gassama, “is also to discuss the way forward for the club and more importantly to introduce each and every executive member of the club to the players so as to know each other for easy working relationship.”

Gassama advised the players to be respectful to one another, warning them of Steve Biko’s zero tolerance to indiscipline, from any player in the club.

The team manager of Steve Biko FC, Chox Jatta, an executive member of the club, who had a successful long spell as a player of Steve Biko, for his part, advised the players to take advantage of the unique opportunity of such an occasion, which was never available during his playing days.

Jatta strongly warned the players, saying they should do away with anything that could jeopardize their chances of transforming themselves into becoming professional footballers in the near future.

In response to the concerns raised by the executive members, Abou Sallah, one of the senior players of the team who spoke on behalf of his colleagues, underscored the numerous constraints the players continue to face in terms of their needs but the executive was quick to give them the assurance that they will do everything possible to remedy the situation for the betterment of both parties concerned.

Steve Biko FC is a community-based club of Bakau founded in 1979.

The club that has adapted the culture of exporting some of the country’s brightest football talents over the years is also known for its attractive football style in the country that is admired by a good number of football pundits in The Gambia and beyond.

Despite the club’s recent success in terms of exporting ’s finest young talents to various professional leagues around the world, Biko have never tasted silverware since their FA Cup success in 2001.

But the team is looking set to put an end to its poor performance in the GFA league as it has set its sight firmly on winning its first-ever Division One League championship title in the club’s history.