African and European leaders are currently meeting in Malta to find a solution to the illegal migration crisis presently taking place across the Mediterranean.

In their 2-day summit, a whopping €1.8 billion will be allocated to be given to governments of the most affected African countries, to utilize in activities and development initiatives that would help in stemming the current tide of illegal migration to Europe, which has taken the lives of more than 500,000 Africans, especially youths.

While this gesture from Europe is appreciated, it is essential to note that no amount of money would really put a stop to the current wave of illegal migration taking place from Africa to Europe across the Mediterranean Sea.

This is because the problems and challenges endemic to the continent would hardly be solved by a mere cash donation.

Africa is plagued with bad governance, poverty, disease, hunger, destitution, war, corruption and leadership crisis, which make it almost impossible for a cash donation to do the work.

In the first place, bad governance, corruption and leadership crisis will not provide good housing and accommodation for the €1.8 billion from Europe, as much of the funds will be diverted into the accounts of corrupt African leaders and government officials.

What Africa really needs is not this type of charities;the continent and her people need development-oriented leaders, good governance,sound and prosperous economic plans, lucrative investments in the productive sectors and creatingmanufacturing firms that will produce goods for local consumption and export, thereby creating massive job opportunitiesfor the people, especially the youths.

How do African leaders and people transform or revolutionize their economies to achieve meaningful development for the continent, is what we should be thinking of and discussing, so as to be able to accomplish a better economic condition that would help us to stem the repercussions of bad governance such as illegal migration.

Fair trade and pricing of Africa’s resources and produce are some of the issues at stake.

African countries should be assisted to be on a platform that would make them capable of manufacturing and exporting more than they are importing, since export-led growth was the centerpiece of the industrial policy that enriched Europe, the US and much of Asia and left millions of people in those continents far better off and developed.

This is the path that would take Africa forward, and let us stem the abhorrent trend of illegal migration to Europe from Africa. Not really some mere cash donation!

“ Help Africa liberate itself from bad governance and poverty.” 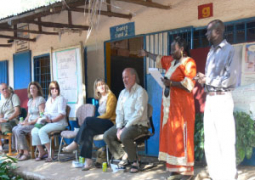