Your Excellency the Vice President

Attorney General and Secretary of State for Justice

Speaker of the National Assembly

Members of the Diplomatic corps

It is indeed my honour and privilege to participate in this important ceremony marking the official opening of the ADR Secretariat on the auspicious occasion of the 14th Anniversary of the July 22 Celebrations. The ADR Secretariat is an important milestone as we continue to develop non-adversarial forms of dispute resolution in this country. The concept of ADR has been a long, traditional African affair; however, its integration in the mainstream court system is now gaining considerable momentum the world over.

Our court system has been structured and designed to settle disputes through adjudication processes in a very impersonal manner. The formal processes are strictly created to meet due process requirements. Court proceedings arc slow, painful and costly owing to: Formal court processes. The human clement involved in facilitating these processes . Deficiencies inherent in archaic court rules and procedures .  The institutions that implement these rules.

Inordinate, undue delays and general dissatisfaction are the hallmarks of the formal system. Even when the disputes are adjudicated upon, court decisions do draw lasting wedges between parties - these may be business partners. close family members. friends. neighbours or co-workers. There is usually only one winner who takes all. Loosing parties express feelings and display disharmony and rancour in such a way that peace can never be guaranteed between litigants.

Albeit, justice would have been done to the case and parties but the result of decisions would carry with them negative social repercussions. The judiciary has a social responsibility, in addition to its constitutional mandate.

We should ensure, through our work, that there is cohesion. peace and stability. We contribute in creating an environment conducive to economic growth, the creation of jobs and the fight against poverty. Given our deficiencies, if we insist on litigating upon every dispute this responsibility would not be delivered.

The meagre resources we do have at our disposal would not support the needs of adversarial litigation. I r we heard all the cases, every where in the country. within a reasonable time.

Our customers, the litigants, would not be wholly satisfied. We would not stop the pain, suffering and poverty that the parties go through - whether they win or loose.

We have a mission in society which is: "to advance the course of justice and the rule of law by ensuring free, fair and speedy dispensation of justice by an independent judiciary and an efficient justice delivery system with highly trained and committed staff that will command the support and confidence of the people" This mission Cannot succeed when all eases, small, big, serious and less serious, continue to be litigated upon.

We are implementing the LEGAL SECTOR STRATEGY 2007-2011 which forms part of the PRSP. One key focus area is ADR: we in tend to promote non-adversarial dispute resolution processes to increase access, decongest courts, reduce delays, support and complement court reform and reduce the cost of litigation

We therefore heartily welcome the advent of the ADR Secretariat. ADR is now fully entrenched in the law. Its processes are simple and focused on dispute settlement.

It provides an opportunity for all disputing parties to win and save their past relations. ADR settlements  are not followed by the usual rancour or ill feelings.

ADR would decongest the courts and allow Judges, Magistrates to devote quality time and energies on meaningful and serious judicial work The judiciary has already established a court-annexed system in the High Court. Its registry has been set up, staffs recruited, office equipment procured and trained mediators utilized.

Thanks to the World Bank. Insignificant as its performance might have been, the court-annexed system was a very good start. Its challenge has been the lack of the ADR Secretariat to provide policy guidance on training issues, mediators, and rates of payment, ADR processes and procedures. Thus  the emergence of the Secretariat is timely and complements our efforts aimed at promoting and implementing ADR in the courts.

On this auspicious  occasion therefore, I wish to congratulate the lion Secretary of State for Justice and Attorney General and through her the Government of the Gambia and the World Bank for successfully bringing ADR to the fore - through the training of trainers, training of the Bench and bar, passing of ADR Act, setting up of ADR Secretariat and recruitment of the staff. We want to assure you of Judiciary's support and co-operation in this venture

On that note, I want to thank you all for very kind attention 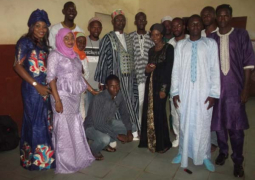 Libyan Revolution marked in The Gambia