Testifying under cross-examination by the state counsel, Mansour M.N. Jobe, Njogu Bah told the court he had indicated in his evidence-in-chief that when he returned from the USA, Mr Dibba was the first civil servant he met.

Since then he had known him in the system, he said.

“I have regarded him as an experienced civil servant considering the number of years he has served in the system,” Bah told the court.

However, he added, he did not really think that permanent secretary Dibba was more experienced more than him, depending on the areas of focus.

He said PS Dibba’s contract had been renewed a few times; which was in response to a question asked by the state counsel whether he would agree with him that in the civil service sector renewal used to be based on commitment

He had known PS Dibba in the system for a long time; he was retired and later appointed on contract, he said.

He was asked by the state counsel whether he could remember that when he was Secretary General and head of civil service PS Dibba’s contract was renewed.

In reply, Dr Bah told the court he could remember once when the file was sent to his office through PMO for onward transmission, and for renewal of Dibba’s contract.

“I have said it in my evidence-in-chief that the appointment of permanent secretaries and other senior government positions are being done by the head of state,” he said.

Further told by the state counsel that by virtue of his office, as then SG and head of civil service, he (Bah) could not be in isolation in renewing the contract of PS Dibba, as he must be in the team that signed his file,

Dr Bah, in reply, told the court that he did sign the file, but the final decision had to come from the office of the executive.

He said he could not also remember whether he had signed it or not, because not all files would go to the head of state he commented on.

He said it was part of his responsibilities, but there were certain files that would come with self-explanation. They would not normally comment on such files as they were directly from the President.

Readers would recall that Dr Bah is standing trial on a single count of ‘abuse of office’.

Prosecutors alleged that Dr Bah sometime in the month of January 2013, at State House in Banjul, abused the authority of his office as Secretary General and Head of the Civil Service by interfering with the recommendation and posting of Ms Jainaba Jobarteh to the Gambia’s permanent mission at the United Nations in New York, without following the proper procedure of nomination, and thereby committed an offence. 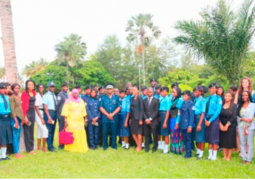