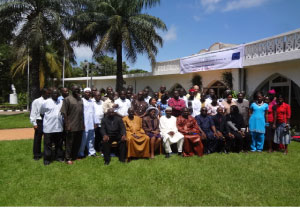 Stakeholders in the agriculture sector on Thursday validated the National Agricultural census report 2011-2012 at the Atlantic Hotel in Banjul.

The forum scrutinized the report and came up with recommendations, and made adjustments were necessary.

The forum was organized by the Planning Services Unit under the Department of Agriculture.

In his welcome remarks, on behalf of the permanent secretary Ministry of Agriculture, the acting director general of Department of Agriculture, Musa Huma, expressed delight to be associated with the validation exercise.

He said that the presence of a significant number of distinguished participants demonstrated their commitment to improve the performance of the agriculture and natural resources sectors in The Gambia.

According to him, the government of the Gambia has recognized the importance of the agriculture and natural resources sector as the prime sector for investment for the attainment of Vision 2020, the MDGs, and Programme for Accelerated Growth and Employment, PAGE.

The importance of availability of reliable and current data and information could not be overemphasised as key elements in effective policy analysis, planning, programming and monitoring for effective and efficient resources mobilization.

Dr Babagana Ahmadu, Food and Agriculture Organization, FAO country representative, said the Gambia government has consistently declared the agriculture and natural resources sector a priority for the achievement of the country’s development agenda.

According to him, it has at the same time emphasized the importance and the need for the availability of reliable agricultural statistical data and information for evidence-based policy, planning, programming and monitoring of the sector.

He asserted that in the past two years the government has demonstrated political will and put in place necessary mechanisms such as strengthening capacities, systems and procedures.

He used the opportunity to reaffirm FAO’s commitment to the rehabilitation of agricultural statistical data and information in The Gambia.

In his official opening remarks  on behalf of the Minister of Agriculture, the permanent secretary ministry of Agriculture, Alphu Marong, said the government of The Gambia has always been committed to sustainable human development and improved living standards of the Gambian people, in general.

In pursuing these goals, the government has established a number of strategies and approaches to achieve these overarching objectives, which includes Vision 2020, the MDGs, the GNAIP and very recently the Programme for Accelerated Growth and Employment, PAGE.

He went further to say the Ministry has recognized that the availability of reliable, current statistics, on the sector could enable it to meet the condition laid by the government.

He also stated that the government recognized the increasing importance of the sector in its development agenda, and declared the sector a priority for investment to achieve the objectives it has set for the country’s economic development and growth in the medium and long term.