The Animal Health and Production Services under the Department of Agriculture and partners recently organised a day-long stakeholder consultation on the report of the performance of the veterinary services, at the National Nutrition Agency in Kanifing.

Speaking at the ceremony, the deputy Permanent Secretary Ministry of Agriculture, Sheriffo Bojang, said the government recognizes the important role of the livestock sector in the socioeconomic development of the country.

"Livestock plays a significant role in the national economy, accounting for about 24% of agricultural GDP with annual growth rate of 3.3%. The sector accounts for about 6% of national GDP and 10-50% of farmers’ income," he said.

The DPS added that livestock serves as farmers' security in the event of crop failure and draft animals are generally used throughout the country in the cultivation of farm lands.

"The Ministry of Agriculture recognizes the important role of veterinary services not only in matters relating to animal health but also in public health, food safety and SPS issues, as well as in the control and prevention of emerging disease, particularly those transmissible to humans such as the Highly Pathogenic Avian Influenza," he noted.

Mr Bojang went on to say the Ministry of Agriculture is totally committed to developing the livestock sector in The Gambia.

According to the Deputy Director of Animal Health and Production Services, Kebba Daffeh, the objective of the workshop was to bring together all the principal stakeholders in animal health sector to share the findings and recommendations of the report and to come up with a framework for the implementation of the recommended actions.

He said the government indicated that the scope and objectives of the evaluation were to focus on the capacity of the veterinary services under the Department of Agriculture, Ministry of Agriculture, to execute its responsibilities for animal health and veterinary public health including food safety needed to modernize the veterinary legislation in compliance with OIE recommendations, he noted.

He also said the veterinary services have important roles which include veterinary public health -including food-borne disease - and regional and international market access for animal products, and congratulated his colleagues in the veterinary profession on the occasion of the World Veterinary year 2011.

Other speakers at the occasion included the FAO country representative to The Gambia, Dr Babaganda Ahmadou, who also elaborated on the significant of animal health.

He reiterated his organization's commitment in complementing government's efforts. 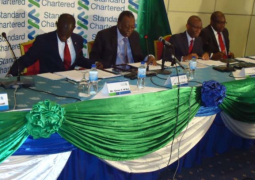