St. Therese’s Junior Choir held a concert and a change of name

Friday, 24th May 2012 was a very important date at it was full of major activities.  The President’s birthday, dance of the Catholic Women of Banjul, cultural show and dinner of the Social Security and Housing Finance Corporation and the two concerts of St. Peter’s and St. Therese’s Junior Choirs were held on this date.

The St. Therese’s Junior Choir held their concert at the Jama Hall of the Kairaba Beach Hotel and at was well attended by hundreds of people – young and old. The concert among the few that always began on time, started on the dot of time.  A host choir of more than thirty members, male and female, sang the concert.  The concert was divided into two parts and it was chaired by two active members of the Choir – Cecilia Senghore and Onike Mendy.  These two on alternated basis filled their audience with nice jokes and announcements of the hymns and songs.  The songs were all sang in different languages and dialects such as English, French, Latin, Sererr, Wolof, Jola and Creole.  The only yearnings of the audience were songs in Manjago which were missing.  The reason being majority of the parishioners are of the Manjago tribe.

The audience of that night were thrilled with the beautiful songs that were rendered by the Choir. The Choir had no invitees from other sister choirs and so sang alone.  The Choir directors were Charles Secka and Edu Mbacku. The latter was a visitor from Dakar, Senegal. Perhaps because of the instrumentality of these two men, the Choir rendered very nice and moving Sererr songs which were danced to by both the choristers and the audience. Many choristers from other Catholic parishes were seen in attendance and very supportive.  Notably among them was St. Kizito’s Choir of Bakoteh.  Their own and able organist, Val Mendy was in the midst of it all playing the organ with very melodious tunes.

At the interval of the two parts of the concert, Rev. Father Edu Gomez, the Columnist of Christian Panorama, was called to launch the new name which the Choir was to adopt. Fr. Edu gave a historical background of the Choir which he was part of.  In 1995, he was Priest-in-Charge at the St. Therese’s Church, where the original members of the Choir were going to church but they were all attending the primary school.  Father Edu was approached by Joseph Potin, Sang Gaye and Alfred Jarju with the idea of a Junior Choir to which he gave his blessing and support. The idea behind the Junior Choir was to involve those in the primary school so that when they grow older they will graduate into the Senior Choir.

In later years this idea faded and so the Junior Choir became stronger and stronger. Now that they are seventeen years in existence, they felt they should no longer be Junior Choir but they should stand on their own. This idea that emanated from them became a dream come true. Thus at the concert, the Choir changed its name to the “St. Lazarus of Bethany Choir, Kanifing”.

The name St. Lazarus was the name of the man whom Jesus raised from the dead according to John’s gospel Chapter 11 and 12.  St. Lazarus was the brother of Mary and Martha, the two sisters who lived in Bethany and were the friends of Jesus.  The Choir made a choice name of St. Lazarus because Lazarus was a friend of Jesus, whom Jesus loved so much that he wept for him when he died.  The Choir wish also to befriend Jesus so that in song they can spread his gospel message to all who listen to their songs.  In fact that is one of the reasons for their annual concerts which is a source of and a ministry to spread Jesus’ message by song.

The concert night was also a moment of honouring the members that served the Choir for a long time.  During the night, Md. Therese Tabal, Messrs. Charles Secka, Edu Mbacku, Appiah and Emmanuel Jatta were given certificates of honour and gifts for their good work and long term service in the Choir.

The Column of Christian Panorama on the occasion of the change of name, wish to congratulate the new St. Lazarus of Bethany Choir, Kanifing.  May their patron saint continue to inspire them to be friends of Jesus. 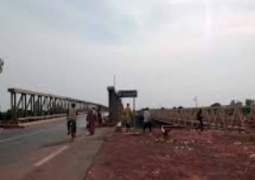 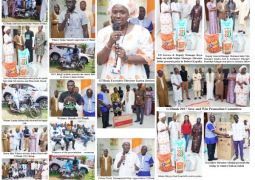