The Social Security and Housing Finance Corporation and  Staff Associations on Wednesday presented a cheque for D100, 000 to the management of the Royal Victoria Teaching Hospital in .

Speaking at the presentation ceremony held at the RVTH premises, Tijan Jobe, who spoke on behalf of the associations, said the association was formed in 2008, and their main objective is to complement government effort in its development agenda.

He pointed out that in 2008 they had embarked on a fund-raising activity to support the RVTH.

For his part, the Public Relations Officer of the RVTH Baboucarr Ngum commended the donors for the gesture, noting that it would go a long way towards strengthening the health delivery system of the country.  He urged other institutions to emulate the gesture.

Professor Patrick Addy, the Chief Medical Director of the Royal Victoria Teaching Hospital said RVTH is a teaching hospital that needs the support of everyone. He stated that the money would greatly assist the hospital in its work. 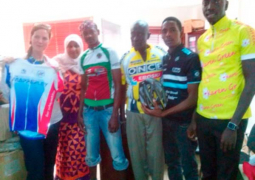