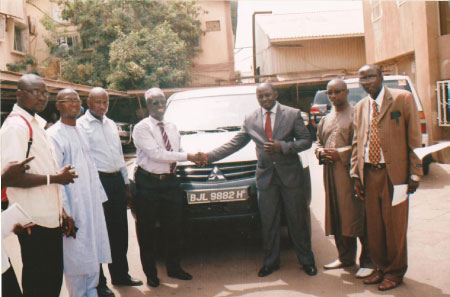 The Department of Labour on Thursday received a brand new double pick-up vehicle from the Social Security and Housing Finance Corporation, SSHFC.

The purpose of the donation was meant to enhance the department’s inspection of workplaces, with a view to prevent occupational accidents and injuries, as envisaged in the Industries Injuries Compensation Act 1990.

At the SSHFC Headquarters in Banjul recently, the deputy Managing Director of the Corporation, Mr. Saibatou Faal handed over the keys of the vehicle to the Acting Commissioner of Injuries, Nyallow Barrow, at a brief ceremony attended by senior management of the corporation.

In his remarks, Mr Faal expressed delight at the gesture, noting that it’s the third of its kind, meant to boost the capacity of the beneficiary for the effective execution of their duties.

Mr Faal noted that doing the necessary inspection of workplaces is a huge task, saying the ICF has a membership of over 100,000 workers and 4,000 employers.

The Acting-Commissioner of Injuries, Nyallow Barrow, underlined the significance of the donation, noting that it would greatly improve their works.

Mr Barrow, who also doubles as the Acting -Commissioner of Labour thanked the SSHFC for the move and pledged that the vehicle would be properly managed and utilised for its intended purpose.

The Senior Public Relations Manager at the SSHFC, Ebrima Dampha also underscored the significance of the donation, noting that it will complement their ongoing efforts towards making workplaces safe for all, and thus contribute to nation-building.