An organising committee has been put in place by the Sports Journalists Association of the to stage a proposed annual football tournament in memory of former Journalist and Coach late Fatou BK Mbye.

A press conference was staged yesterday at Today Newspaper's conference hall, meant to inform the public about their intention to stage the two-week football tournament for a departed colleague who is still lingering in the minds of every sports lover in The Gambia, as well as her colleagues in the media.

The one hour press conference was meant to discuss the issues regarding the successful organisation of the memorial football tournament for a well-known sport personality and committed sports journalist for that matter, who was widely regarded as one of the most outstanding youths the country has ever produced through her role as a sports presenter, Youth co-coordinator, as well as a promising female coach.

Fatou who died at the age of 28 was both the head and the heart of the s success the club she was appointed as the Head Coach two years ago.

Speaking at a press conference, the President of the Sports Journalists Association of the , Namory Trawally appealed for massive participation, noting that tournament of this nature should be considered seriously.

"I am appealing to the participating teams to consider the tournament as a way of looking for charity and not a competition," the association's boss stated.

The tournament will kick-off on Friday 19th February 2010, at the Serrekunda East and West Mini-stadium.

The tournament will involve 8 teams to be divided into two groups and the final is expected to be played on Friday 26th February, at the Serrekunda East Mini-stadium. 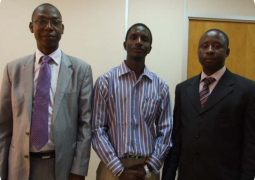