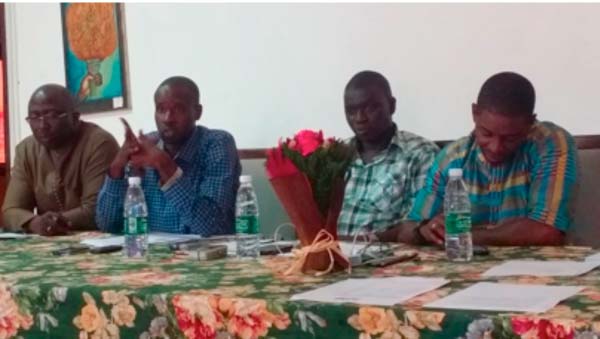 The AGM, which was supposed to be held since October, was shifted due to the political impasse.

The AGM was attended by SJAG members and representatives from the GNOC and National Sports Council.

Speaking at the meeting, Executive Director, National Sports Council (NSC), Marcel Mendy, commended the SJAG executive for fulfilling one of their constitutional requirements, which is to hold AGM annually.

The NSC executive director encouraged the SJAG to continue the momentum by annually organizing such for the general membership, while calling on other sporting associations to emulate SJAG.

Musa Sise, President of SJAG, reaffirmed his executive commitment to move on in its desire to positively represent the members.

He said the essence of the AGM is for members to discuss and share ideas openly in order to move the association forward.

The year under review, according to the SJAG boss, had not been an easy one, but successes were registered.

According to him, the presence of the representatives of GNOC and NSC at the AGM was very important, while appealing to them to continue to recognize SJAG as a legitimate body and stakeholder in the sports development and promotion.

“We don’t want to see people sitting on the fence; be part of the change because we see SJAG as a family.”

He finally appealed to the general membership, especially the executive members to double-up their efforts in contributing to what is expected from them in developing the SJAG.

For his part, GNOC Secretary General Abdoulie Jallow said the importance of good governance could not be overemphasised, commending the SJAG executive for ensuring that the AGM is held at the material time.

He added that the GNOC will continue to work closely with SJAG and will do its utmost best to help in building the capacity of sports journalists through SJAG.

In his activity report, Alieu Ceesay, secretary general of SJAG, welcomed delegates to the AGM of SJAG.

He said it is a constitutional requirement that an AGM is convened to report to the general membership the activities of the association during the year under review.

He reported that a high-powered delegation comprising four executive members of SJAG in December 2015 travelled to Dakar, Senegal, to attend the National Sports Award, organised by the Senegalese Sports Journalists’ Association (ANPS).

“It is often said that united we stand and divided we fall, and all work no play makes Jack a dull boy. It was in this spirit that members of the Sports Journalists’ Association of The Gambia (SJAG) on the 29th January 2016 gathered at a local beach for what they called the annual Family Fun Day Out. Attended by members of the Association from the print and electronic media, and acquaintances, the beach party saw members put their different sporting skills to test, with food and drinks available in abundance.”

In presenting his audited financial statement for the year under review, Namory Trawally, SJAG treasurer, said the accounts were verified by an external certified auditor who gave an honest opinion on the accounts of SJAG.

“During the financial year under review, SJAG’s assets had dropped by 8.8% from over D689, 800.67 to D635, 891.67. This in real term is a drop of D53,909.00. The main contributor of our drop was the decrease of the funds mobilized for National Sports Awards and the non-payment of monthly contribution from the general membership.”

“SJAG in implementing its mandate incurred expense totaling D595,242.83 in the year under review against D631,755.50 a year ago. This expenditure drop of D36,512.67 is due to rigorous financial measures put in place by the SJAG Executive.”

The SJAG Executive Committee, according to treasurer Namory Trawally, would continue to engage its partners to facilitate the development of its members.

“We remain committed to judiciously manage the resource entrusted to us to ensure that all our members are treated equally. I would like to implore with all members to come forward and pay their monthly contribution to enable the executive to execute its numerous activity plan for the interest of Sports Journalism in the country,” said Trawally.

He concluded by thanking SJAG’s partners who have been there for the body since the inception of the National Sports Award in 2007. Among the partners are Africell, Bayba, Trust Bank and Gambia Civil Aviation Authority.

“Special thanks go to The Gambia Chamber of Commerce and Industry (GCCI), Guaranty Trust Bank and PURA for sponsoring individual Awards at last year’s National Sports Award,” he said.

The delegates adopted both reports by the secretary general, Alieu Ceesay and the treasurer, Namory Trawally.

SJAG member Sang Mendy recommended for SJAG to organize a forum to discuss on the “future of sports journalism,” considering the fact that many are now going into political and current affairs reporting.

He also suggested for more training programmes for members to further build members’ capacities to effectively carry out their work.

He urged sports journalists to build interest in SJAG instead of criticising the body.

“I criticize the body when I see things that are going wrong because I am a member. But you cannot be out there criticizing SJAG when you are not even a member,” he remarked.

Mendy also frowned at lack of commitment by some Exco members towards SJAG, calling on them to be committed or excuse those ready to serve the body to come on board.

Paul Steven Prierra of Star FM said SJAG should look out for its committed members when there is training opportunity.

Sally Jeng wanted the SJAG Exco to work on securing an office for the association. She appealed to the executive to help those yet to secure their SAJG cards to do so.