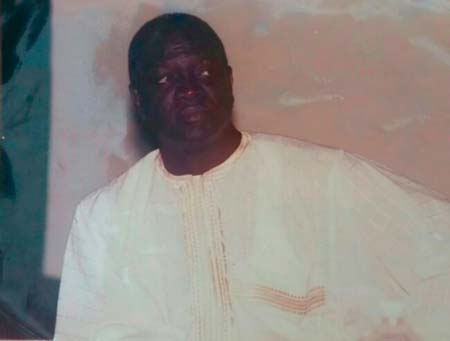 Hundreds of people, among them sports personalities, friends and relatives attended the funeral. Some of them spoke to The Point.

Alhagie Nyan, former footballer of the national team, said: ‘’Kaba was a good brother. He used to advise me and was my coach. He used to teach me to be committed to the game.’’

Mass Axi Gai, ‘’Kaba Jallow was my childhood friend. We were living together when we were young within hundred meter in Soldier Town. We played football and we were members of Fiesta Vous.

“In 1973, when I left Adonist Football Club, I joined White Fanthoms, the team that he was playing for. We shared technical knowledge. I was his assistant in the National team from 1978 to 1982. He was well respected and devoted to Islam. May his soul rest in peace.’’

Saihou Sarr, former national coach of The Gambia, said” ‘’Kaba was my uncle and brother. It was not only football that united us but a lot of things in common. He was our elder in football. I played with Real de Banjul and we were playing with White Fanthoms. We played together in the National Team. I was sad when I heard that he passed away.’’

Lie Ndure, former goalkeeper of The Gambia, recalled his time with Kaba, saying: ‘’Kaba was my coach. He trained me to be a good goalkeeper. One day I collided with Bai Malleh Wadda and I was seriously wounded. Kaba encouraged me to go with him with the national team to Ghana, Togo and Nigeria. He gave me all the support and encouragement during my career.”

Modou Thompson alias Alex said this of the late coach: ‘’I played with Kaba in White Fanthoms and the national team. He used to give me football related books from which I learnt many things to develop my talent.’’

Kebba Diaz another sports personality, said: ‘’Kaba was my captain. We played together in the national team. He used to give me good advice and knowledge of the game. May Allah give him a cool ground.’’

Birri Njie, former great player of The Gambia and icon of football, said: ‘’I played with Kaba for many years. He was also my coach. He contributed a lot to the development of the game. He is an icon. May his soul rest in perfect peace!”

“Kaba did well. He brought us to semifinal in 1979 Zone Two in Guinea Bissau. The same year we played final in Liberia, for the Tolbert trophy with six nations and we reached final. When we came to The Gambia, we had a rousing welcome. We lost the final but we were very proud. He used his money to motivate his boys. We travelled to China, France, Germany, Norway, Denmark and many African states.”

Lamin Owens said: ‘’Kaba discovered me in 1979 when I was playing with Kwame Football Club, Serrekunda. He taught us all technical skills of the game. Sometimes we quarreled and agreed. He contributed to my career and he was very helpful to his players.”

Omar Sey, who was once a chairman of the referees association, and executive member of CAF, said: ‘’Kaba was a prominent and important figure in Gambian football. He was committed, very determined and a good football. He gave everything in the field and played with commitment. He knew the tactics of football as a footballer. He applied them when he became a coach that was why he was a successful coach. He was a role model for young footballers. A lot of footballers and coaches learned a lot through him about football. We pray for his soul to rest in eternal peace in his kingdom. The Gambia has lost an asset.”

Laos, former captain of the national team, said: “The death of Kaba had left a big vacuum in Gambian football. I joined him in the national team from 1975 to 1978. He was my coach. At first I was a right-back player but he trained me to become a midfielder. He had contributed so much to my career. May his soul rest in peace!”

He said: ‘’It was because of Kaba I became a successful sports journalist until I became a press officer in the Confederation of African football. As a coach, he would always insist that I should go with the national team to watch their matches overseas. I have lost a friend and a great expert of the Gambian football. He had contributed a lot to the development of football. May his soul RIP!”