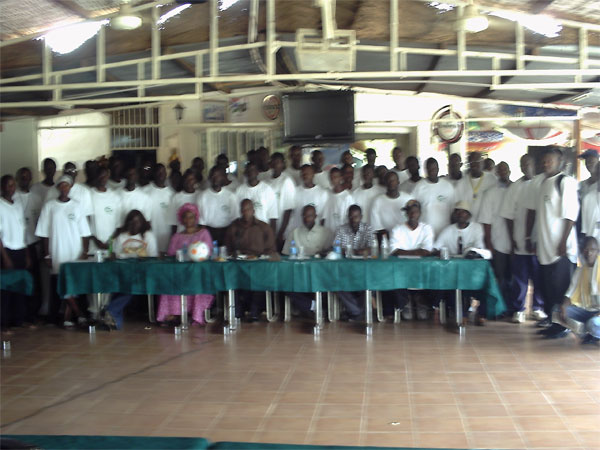 Following the celebration of world sports journalist day in the , the General Sectary of the sports Journalist Association of the Ms. Sainabou Kujabi has called on all sports journalists in the to come togetherand unite as one.

Speaking during the occasion held on Saturday July5th 2008 ,at the in West field, Ms Kujabi called on all sports writers in TheGambia to come together and put aside anyform of differences among theirselves and come together to work towards a common goals.

She also pointed the importance of sports journalism in the promotion of sports towards national development. She said " if there were no sports journalism the nation will not know much about our games and our athlete might not even be regconised. In recognition of this significant role, I would therefore urge all stake holders to work with the Sports Journalist Association of The Gambia in realizing sports forexcellence".

In his remarks, the Sectary General of The Gambia Press Union Emil Touray saidSport Journalists Association of The Gambia deserve recommendation because " they are an organized body and over the years they have reported positively on sports development, most of the people in this country are today talking about football because of the sports journalistsassociation of the Gambia, people both within the upper and rural area depend on the sports journalist in other to get feed back for the development on sports, therefore we must moved on heaven and earth towards making sure that we report positively as we having been doing all the past"

GPU Secretary General addedthat there are instances when some people will not be happy on what we write or reporting on papers or over the electronic media, but our objective is not to please anybody, our objective is to report positively and accurately and it is the public that we owe an obligation.

He said what ever we report should be factual and we should not be borders by induvuduals.

In his remarks the newly appointed Sectary of State for Youth and Sports, Sheriff Gomez said that July 2 every year is been commemorated globally as the international sports journalist day, and the Gambia joint this fraternity in this celebration

Speaking on the theme of celebration " the role of sports journalism in sports development" he said"As journalist one of your cardinal responsibility is to inform educate and indeed to entertain, your role in sports development cannot therefore be over emphasize, sports journalism is one of the vital pillar in sports organization which is use as the link between the association and the general public, we have witness your commendable effort and strive in the publication of activities related to sports both in the print and electronic media."

He said that his department of state is aware of theeffort of the sports Journalistin the area of capacity building for journalist who specialized insports writing and reporting, and that should not only stop at the level of in house training but eventuallyto higherlearning achievements.

He said people rely on the association andJournalistin the media fraternity for the discrimination of information to stake holders.

SOS Gomez assure the association his personal and his department of state continue of support, he further said that his doors are always open for information sharing.

Secy Gomezthen called on all national association, to collaborate ,support, contribute and work with the sports journalist association so that their activities are made know.

"I am proud of all of you to have initiated this celebration for that reason my commendation to you for coming together to form such an association that devote it'stime in promotion and development of sports," he stated.

Meanwhile the event was witnessed by the first vice president and IOC member Beatrice Allen, Director Youth and Sports Malang JassehManaging Director and co publisher of the Point News Paper who is also thelife president of the Sports Journalist Association Mr. Pap Saine, members ofthe Scorpion fans club ,invited guest and members of the Sport Journalists Association of The Gambia. The commemoration took place in the form of a match past from Gamtel, Serrekunda Exchange to the by members of the Sport Journalists Association of the and the National Scorpion Fans Club