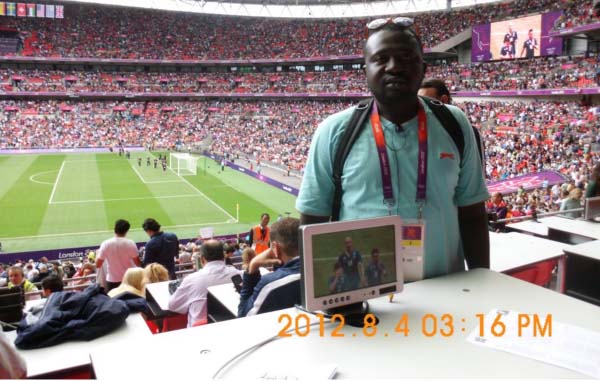 Baboucarr Camara, sports editor at the Daily Observer Newspaper, his highlighted the role of the media in football development.

Making a presentation on the role of the media in football development during the National Football Forum held at the Independence Stadium Friendship Hotel, Mr Camara, also a senior news editor at the said newspaper, added that the role of the media in today’s world is to educate, entertain and advertise but at the same time provide accurate and analytical information.

The role of the media as well includes documentary programmes (linking education to sport; links to a healthy lifestyle) as well as sponsorship for corporate awareness and the use of sports stars for marketing, he went on.

“In the world of today, the media has become as necessary as food and clothing,” Mr Camara, a student of journalism and digital media at the University of The Gambia, stated.

The media has played and continues to play a significant role in strengthening the society, he observed, adding: “The media is considered as ‘mirror’ of the modern society as it is the media which shapes our lives.”

“The purpose of the media is to inform people about current news affairs,” he noted: “We need to improve on our coverage as well as stay away from the politics of sport.”

The media should also capitalise more on the emergence of Twitter and Facebook that allows direct communication with key stakeholders, Njies, as he is fondly called, also said.

Society is influenced by the media in so many ways, he pointed out, saying it is the media for the masses that help them to get information about a lot of things and also to generate informed opinions and make judgments regarding various issues.

“It is the media which keeps the people updated and informed about what is happening around them and the world,” he further said.

Commenting on the impact of the media, he said, the media has both positive and bad effects on society, mainly because the youth are strongly influenced by the media.

Teenagers and children wish to follow the people, who get recognised and do what they do to get noticed, he remarked.

The media affects people’s perspective and can be considered as “watchdog” of political democracy, he added, saying the media has played a significant role in making the world what it is today and can as well reduce the communication gap among people.

There is the need to expand the media department of the federation to a ‘Communications Department’ which will improve relationship between the federation and the mass media, he suggested.

The communications department should be proactive in providing information as well as create Database for record keeping, said Mr Camara.

The federation should employ specialised persons to be headed by the Director of Communications to handle media relations, he suggested further, noting that the occupant of that position should be well versed in the field of football.

He should also create a strategy and operation plan of the department and at the same time be the voice of the team/association, he added.

“The PR should also brief the media regularly; prepare press releases and conduct interviews,” the Daily Observer sports editor went on, adding that he should also have close relations with top journalists and editors as well as have access to players, coaching staff, officials and should be able to put across the message through relevant media.

He also pointed out the need to celebrate our own such as referee Bakary Papa Gassama (the face of our local products); Jaliba Kuyateh and Sports (RTS & the 100% Frenzy); Sports Talent Show; Biri-Biri & Jatto Ceesay and Pap Saine, who has an encyclopedia knowledge of Gambian sport, especially football, and has covered several international competitions.

He called on the younger generation to use Mr Saine as a reference point.

On the media-federation relations, Mr Camara said, at times the federation has misconceptions about the media as well as preconceived mind and therefore called on them to stop seeing the media as an enemy.

In conclusion he said it is his belief that if these structures are put in place “we will realize excellence in sport”.