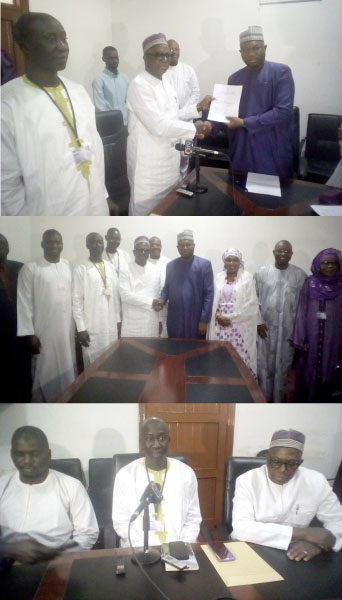 Gambia Port Authority (GPA), Friday paid an amount of twenty million dalasi as dividend to the government of The Gambia through the Ministry of Finance and Economic Affairs.

The ceremony was attended by some senior staff of the Authority, minister of Finance and Economic Affairs Mamburay Njie and his permanent secretaries and chief executive officer of Gambia Chamber of Commerce and Industry (GCCI).

Speaking at the presentation ceremony held at MOFEA conference hall, managing director of GPA, Ousman Jobarteh said the payment of the 20 million dalasis was based on GPA’s audited financial statement from the year ended December 2018.

He said one of the hallmarks for paying the amount is at a time when the performance of the Authority was improving as expected, saying although there are some challenges in term of infrastructural improvement.

Mr. Jobarteh said the efficiency of the port has significantly improved, which he said has made them proud. “This is about my staff determination, team work and commitment.”

He also expressed profound gratitude to the board of directors of Gambia Ports Authority for their foresight and the guidance they provided to the management. He commended the government for its continued support to GPA.

Alieu Secka, chief executive officer of GCCI, who spoke on behalf of the chairman of the GPA board of directors said the payment of the amount as dividend to government was a good move.

He said for the last 12 months, GPA continued to tackle the challenges and continues to make giant steps in providing the required services within its mandate.

He said commended the previous board for diligently serving and ensuring that the future of the port is sustained not only today but for the future. He assured that GPA will continue to work with government to achieve its desired goals to build the capacity of the port.

In receiving the cheque on behalf of the government, Minister Mamburay Njie thanked GPA management for the giant strive, saying that last year, the Authority had paid 5 million dalasi dividend to the government.

“It is in this regard that the government of The Gambia recommits its support to the Authority to transform the infrastructure of the port to an ultra modern facility – capacity of meeting the modern day international tackle facility requirement.”

He said this will allow the ports to maintain its regional trade hub status due to efficiency and increase digitalisation.