Fate surrounded him with care and protection; whenever the urges of the psyche drives him to look forward to enjoying sensual pleasures or following uncommendable traditions, divine providence intervened to stand between him and such bad traditions. The Prophet (PBUH) was reported to have said:”I never intended to follow any of the traditions that people in Pre-Islamic period practiced but in two cases, as Allah protected me against all of these matters. So I continued keeping away from such traditions till Allah honored me with His Message (Islam); one night I said to a boy who was grazing sheep with me, at the highlands of Mecca, “Would you care about my sheep? Because I want to enter Mecca and spend the night enjoying myself as other young men do.” The boy said: “yes, of course.” So I walked and when I reached first house in Mecca, I heard someone playing an instrument. I asked (people around me): “what’s this?” They said: “This is the wedding ceremony of so and so.” I sat down listening to the sound of playing. But Allah made me hear nothing and sleep surmounted me. Nothing but the heat of the sun that awoke me up. Then I returned to me fellow and informed him of what happened. On another night I said the same and headed For Mecca. But the same thing happened to me as the first time. So I never resolved to perpetrate something bad.” (Narrated by At-Tabary and others).

Al-Bukhary reported that Jabir ‘Abdullah said: “When the Ka’aba was being rebuilt, the Prophet (PBUH) and ‘Abbas went to bring stones (for construction). ‘Abbas said to the Prophet, “Take off your loincloth and put it around your neck to protect it form the sharp stones.” When the Prophet (PBUH) did so, he fell on the ground with his eyes open towards the sky and said: “Oh, my loincloth! Oh, my loincloth!” ‘Then he covered himself with his loincloth.” There is an addition in another narration, which reads: “This was the first and last time that his private parts were uncovered.” (Narrated by Al-Bukhary)

The Prophet (PBUH) was distinguished, among his people, with excellent traits and good manners. He was the noblest, most well-mannered, generous, kindest, most truthful, most good-natured, chestiest, benevolent, loyal and honest of all of his people. Because of his good manners and unmatched attributes his people called him ‘Al-Ameen’ or the trustworthy. He was as Khadija said “He endures fatigue and hardship, feeds the destitute, shows hospitality towards guests and helps other in time of misfortunes.”

Prophethood and vocation the Meccan Era

The Prophet’s life can be divided into two entirely different eras from the moment Allah honored him with Prophethood and Messengership. They are;

1.The Meccan era that lasted for approximately thirteen years.

Each of the two eras includes several stages, each of which has particular characteristics that distinguish it from other stages. This can be clear from the accurate review of the circumstances which vocation underwent during the two eras.

As for Meccan era, it can be divided into three stages:

1.The stage of the clandestine vocation which lasted for three years.

2.The stage of proclaiming the vocation among the people of Mecca. It begins from the fourth year of Prophethood to the Prophet’s immigration to Medina.

3.The stage of spreading the vocation outside Mecca. It extended from the tenth year of Prophethood till the Prophet’s demise.

As regards the stages of the Medinan era, they will be discussed later.

In the shadow of Prophethood and Message

When the Prophet’s age approached forty and his past contemplations widened the gap between him and his people, he adored seclusion. He used to take Sawiq and water with him and go to the Cave of Hiraa, the mountain of An-Nur which is two miles away from Mecca. It is a comfortable cave with four cubits in length and one and three quartet’s cubits in width. He used to stay inside it all the month of Ramadan reflecting over everything in the universe around him and the creative power that stands behind it. He was discontented with and uncertain of the flimsy polytheistic beliefs and the unconvincing concepts which his people adopted. He, however, had no clear way or a definite course to and be satisfied with.

The Prophet’s opinional seclusion was predestined by Allah who willed him to be away from the cares and stress which occupy life. This also was preordained to be a turning point for his readiness for the great task that awaits him and to gear himself up for receiving the major trust and changing the earth’s face and the course of history. Allah, Glory be to Him, framed the Prophet’s seclusion three years before entrusting him with the Message. He spent a whole month meditating on what was metaphysical till Allah willed him to deal with that which is supernatural and unseen.

When the Prophet (PBUH) was forty years of age (which is the core of perfection and which is reportedly the age when Prophets were sent by Allah), the precursors of the Prophethood began to glitter and emerge; a stone in Mecca was started to have greeted him; he used to have true and good dreams that would materialize as clearly as daybreak. This lasted for six months-the period of Prophethood was twenty three years. In Ramadan of the third year of his seclusion in Hiraa Allah willed creations on earth to receive His all-embracing mercy. Hence, Allah honored Muhammad with Prophethood and sent down Gabriel with some verses of the Glorious Quran.

After studying and reviewing relevant evidences we can fix the day when the Prophet (PBUH) received revelation, that is, it was on Monday night, the 21st of Ramadan, the tenth of August, 610 AD. His age was then forty lunar years, six months and twelve days exactly. This equals thirty nine solar years, three months and twenty days.

Now we will listen to Aesha who gives the account of this event which was the starting point of Prophethood which changed the course of history:

“The first thing the Prophet (PBUH) began with is the good vision he used to have during sleep; he used to have dreams that would come true as clearly as daybreak, then he felt like solitude. So he was in the habit of secluding himself in the Cave of Hiraa observing acts of devotion for several nights before returning home to gear up himself again for the same journey. Next, the returned to Khadija to get himself ready for equal nights. This continued till the truth [revelation] came while he was in the Cave of Hiraa.

Read in the name of your Lord who created. Created man from a clinging substance. Recite, and your Lord is the most Generous-Who taught by the pen. (Al-Alaq: 1-3).. 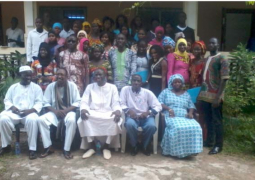