SOS Sunu Corner Youth Initiative members Friday celebrated the Day of the African Child at the SoS grounds in Bakoteh, which brought together school children, teachers, parents and the SoS directorate on the theme: “A child friendly, quality, free and compulsory education for all children in Africa”.

Mbye Baboucarr Jallow, president of the Sunu Corner Youth Initiative, said the day was set aside to remember those hundreds of children who were shot to death on 16 June 1976 in South Africa [Soweto], for protesting for their right to quality education and also to be taught in their own language.

He said as a youth organization, it was their duty to be part of such celebrations as it is a day to celebrate the lives of those children who laid their lives to make a much more better future for today’s African children.

Speaking on this year’s theme, Mrs Taal, the national director of SoS Children’s Village, said in anything someone wants to do, he/she should put in some efforts as he/she could not be given all for free.

She said most countries in Africa are developing, so for free education to happen, it would take a long time.

She advised children to take their education more seriously, as the world is advancing everyday and would not like to see Africa lagging behind when they should be in front.

Representing the Ministry of Basic and Secondary Education was Mrs Faatu Touray, who said child-friendly education should start in homes, societies and every aspect of the child’s life.

She said it helps a lot in the development of the child, adding that child friendly education is going on in The Gambia, because it was part of the laws that there should be no corporal punishment in all schools, both government and private schools.

She added that the world we are living is a global village, and it is growing as the days pass by; so education is an important weapon to bring about change in Africa, and every child should take it seriously.

The day was also celebrated with senior secondary schools competing in a poetry competition on the topic “Education”, with Nusrat coming first, followed by Glory Baptish and SOS secondary school.

The first received a voucher to collect goods worth D2,500 at Timbooktoo Bookshop, while the second and third person received D1, 500 and D1, 000 respectively. 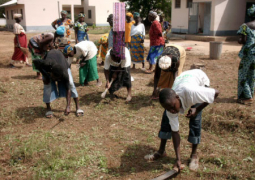