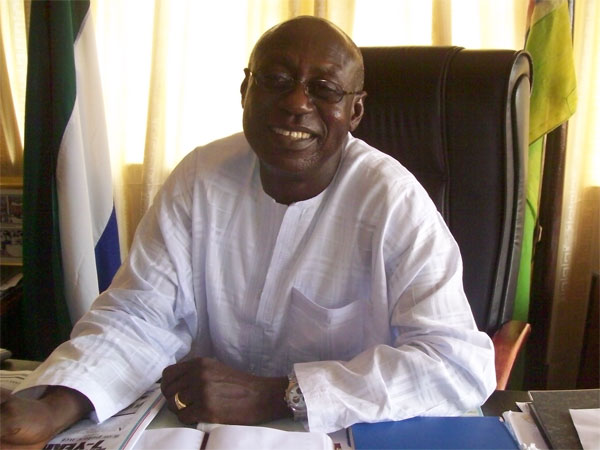 The good deeds in the diplomatic level by H. E. Mohamed Foday Yumkella have not gone unnoticed by the many diplomats and ordinary man in The Gambia. Adding to the many voices is Dr. Omar A. Touray SoS for Foreign Affairs at the Jerma Beach Hotel organised through the foreign office by He President Yahya A. JJ Jammeh on the occasion of the departure of the Sierra Leonean High Commissioner to The Gambia. Society and Development went to find out how society was influenced by HE Mohamed Foday Yumkella's diplomacy in his four years tenure as High Commissioner. A levelheaded politician and a focus man, he has created a lot of impact and made the difference that was not. Read on and enjoy on.

There has been several gathering for the outgoing High Commissioner of Sierra Leone to The Gambia at the end of his term of office in the country. One of these was the Foreign Affairs who organised a befitting family dinner at the Jerma Beach Hotel and sentiments expressed.

In his speech, Dr. Omar A. Touray SoS for Foreign Affairs said "His Excellency Mr. Foday Yumkella High Commissioner of the to The Gambia at the end of his tour of duty that has lasted for about four years now returns home." During this period, High Commissioner Yumkella has become not only an important member of the diplomatic community in The Gambia but also a cherished member of our Gambian family, through his close association with the and thinks Gambian.

But most importantly he continued High Commissioner Yumlkella has demonstrated his competence as a diplomat. By enhancing the excellent relations between the and and by raising the level of understanding and cooperation between the two countries. "High Commissioner Yumkella has proven that he is a worthy Ambassador of his country and true pan Africanist. The has demonstrated its appreciation of Ambassador Yumkella in several ways. On example is the decision of his Excellency Alhajie Dr. AJJ Jammeh, president and Head of State of this country to decorate High Commissioner Yumkella with one of the national medals of The Gambia. And the dinner tonight is being hosted by instructions from HE The President."

Talking about the relationship between and The Gambia, SoS Touray says, " is a country to which The Gambia feels particularly attached. In the early 19 Century, served as the residence of the British Governor, who also ruled the Gold Coast () and The Gambia. This shared colonial experience, our common culture and physical proximity have enabled the two countries to nurture excellent bilateral relations and cooperation over the years. Several distinguish Gambian personalities were trained in Sierra Leone and even today Sierra Leonean Institutions of higher learning have remained centres of excellence for young Gambians.

"Indeed the various High Commissioners of Sierra Leone to The Gambia worked tirelessly to raise cooperation between The Gambia and to high level. But what High Commissioner Yumkella can boast of is outstanding. During his tour of duty, His Excellency President Jammeh visited and His Excellency President Ernest Bai Koroma visited The Gambia twice within a short period. For any diplomat, this is a brilliant feat and I would like to salute the contribution of High Commissioner Yumkella to the excellent relations that these high level visits underscore." Dr. Touray said.

SoS Touray associated diplomatic life to that of nomads but said the diplomatic life was more nomadic than that of the nomads themselves. "Diplomats have developed the capacity to jump with considerable ease from the frosty cold winters of to the belching heat of desert areas. The good thing, is the more they move the closer they stay together, because after all, the move within the same ring. It is therefore heartening to know that while we but High Commissioner Yumkella farewell tonight, we will be interacting with him in different fora"

HE Yumkella was given a gift from the Foreign Affairs.

In response HE Yumkella says, "There was a yesterday, a today and a tomorrow. There was a Sierra Loenean Ambassador and today I am going. He quoted an idea from and praised President Jammeh for arranging for the dinner for him.

Praising Gambian hospitality, HE Yumkella said, "Gambian hospitality goes beyond bounds. There is a special kind of relationship between the two countries. MY colleagues should know that there is a blood relationship between the two countries." HE Yumkella thanked and praised Dr. Isatou Njie Saidy, the VP of the country for her leadership qualities. "I learnt a lot from of leadership skills from her, she is great. I thank you the SoS for Foreign Affairs I thank Ambassador Maudor Touray and all of you ambassadors I will miss you all. I thank SoS Fatou Faye who has a school named after her in which she unveiled herself. I thank the immigration, the military and the whole security. The country is peaceful, keep it up. I thank the Speaker and members of the Parliament for the democracy they are practicing. I thank every Gambian and all those who made my stay memorable."

HE Yumkella took the opportunity and said, "To the most esteemed part of my thank you, I must thank you, President Dr. AJJ Jammeh. I think I have been inspired by his leadership qualities. There is what is called the American D     ream. As long as you enter and you follow their norms the sky is the limit. I admire the President's dreams and aspirations. I am leaving The Gambia and I am going back to the farm. I am inspired by President Jammeh and I am going back t do what he is doing. He has done so much in making me realise my dreams. I find it difficult to say thank you. Jola speakers, I say "Jajack." I am leaving my staff here take care of them and I hope my successor will carry on. I would love to stop here as I leave for a new career, I thank you."

Speaking on behalf of the Diplomatic Corp HE, Yahya Ngam, the Ambassador of the Islamic Republic of Mauritania to The Gambia, praised diplomacy as the most beautiful job in the world because it brings people together. "We are lucky in The Gambia we do our work with ease. Our colleague is going he has said a lot especially about President Jammeh and it is all-true. The diplomatic Corp will miss you HE Yumkella."