The Nawettan was played at Bwiam Village Field, organised by Bwiam Sports Committee as part of their annual Nawettan bonanza. When the Central Referee blew the whistle for the commencement of the full match, the supporters for both teams were dancing, clapping with the hope of a victory for their individual teams.

As the match was at its early stage, Kanfenda FC dominated the game but their boys lack scoring spirit and with all that pressure from Kanfenda FC, Sonkos FC boys put a strong defence in their eighteen-yard box.

In the first half of the match both teams failed to score and in the second half Sonkos FC also mounted big pressure against Kanfenda FC.

As the match came to an end, the supporters for both teams started loosing confidence on their players' side, thus speculating of post-match penalties.

The Central Referee finally blew the whistle for the end of the full match and then the two teams settled for post-match penalties during which Sonkos FC as the defending champions registered three goals to one.

As winners Sonkos FC received D1, 500 and a trophy, while Kanfenda FC as runners-up bagged home with D1, 000. 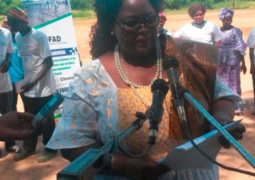