Magistrate E. Jaiteh of the Brikama Magistrates’ Court recently convicted and sentenced one Omar Manneh to one year in prison with hard labour.

The convict, Omar Manneh, was found guilty of threatening to kill his father, Fansu Manneh, in Lamin village in the Kombo North district of the West Coast Region.

Delivering his judgment, the presiding magistrate told the court that he had carefully listened to the proceedings, and read the testimonies adduced in the trial, where the prosecution alleged that the accused, Omar Manneh, threatened to kill his father, Fansu Manneh, with a knife.

He said the offence was committed in Lamin village in Kombo North District of the West Coast Region on 15 October 2014.

It is a cardinal principle in criminal cases that the legal and evidential burden of proving every element of the offence beyond reasonable doubt lies on the prosecution, he said.

According to him, from the foregoing, it was clear that the prosecution must succeed on the strength of its own evidence and not allowed to rely on the weakness of the defence or lies told by the accused as the basis for a conviction.

With regards to the first issue as to whether the accused threatened to kill his father, Fansu Manneh, constituted the Actus Reus of section 84 of the Criminal Code.

In proving the first element of the offence, the prosecution called four witnesses and tendered a knife, the voluntary and cautionary statements of the accused person, the magistrate stated.

“All the prosecution witnesses have confirmed to the court that the accused person threatened to kill his father with a knife on that fateful day, and I hold that as a fact, and resolve the first issue in favour of the prosecution that they proved the actus reus with the certainty required by law.”

He said with regards to the second issue as to whether the accused person, Omar Manneh, intended to kill his father, FansuManneh, with a knife is the mens rea of the offence under section 84 of the Criminal Code.

The prosecution witnesses, who were present at the crime scene, testified under oath that the accused was attacking his father, Fansu Manneh, with a knife to kill him and this fact had not been controverted by the accused to the contrary and he held it as a fact, said the magistrate.

The accused person, Omar Manneh, raised a defence of insanity and a medical report dated 12January 2015 by Dr. Lamin E.S. Jaiteh, the senior registrar at Edward Francis Small Teaching Hospital confirmed that Omar Manneh had been diagnosed with Drug Induced Psychosis, and had since then been manifesting violent behavior and considered him to be dangerous to himself and the society.

He said Dr. Lamin E.S. Jaiteh pointed out that the accused, Omar Manneh, threatened to kill people around him including his biological parents, and advised he be put into restrained custody while he continues to receive his treatment.

“However, the medical report did not disclose that the accused was suffering from severe mental illness or severe mental mishap, and the accused state of mind did not fall under the doctrine of the “M’Naghten Rules.”

“I have had the opportunity to watch the accused very closely during the course of the trial and I must say the accused was alert, conscious, and did not exhibit any signs of mental illness,” the magistrate stated.

He said the police prosecutor, Corporal 3999 Secka, in his address stated that the accused was a drug user, and pointed out that whilst under the influence of drugs he behaved erratically.

The accused person, Omar Manneh, could remember every detail of his action on that fateful day, the magistrate went on, and he consequently arrived at the conclusion that the accused was not an insane man; rather acting under the influence of drugs, he continued.

It was a fact that when the accused was devoid of drugs, he comported himself in an orderly manner, he stated.

“I, therefore, reject the defence put forward by the accused; that it lacks merit and not tenable. I am, therefore, satisfied that the prosecution has proved the second elements of the offence under section 84 of the Criminal Code with the certainty required by law.

“I have had the opportunity to watch the accused person closely when he was giving evidence. I must say his demeanor was not convincing at all. I am, therefore, satisfied that the prosecution has sufficiently established the constituent elements of the offence as charged.

“I am further satisfied that the prosecution has proved their case beyond reasonable doubt and, therefore, I find the accused guilty as charged and convict him accordingly.

“I have listened very carefully to the convict’s plea of leniency, begging the court to temper justice with mercy on the grounds that he is the sole supporter of his aging mother,” he added.

The convict was a habitual drug user who was intimidating his family and terrorizing the society whilst under the influence of drugs, he added.

“I cannot hide my distaste, repulsion and contempt for a drug user bent on threatening his biological father. I see no reason for such a cowardly behavior and the convict, Omar Manneh, is a disappointment and a disgrace to his family,” said the magistrate.

The convict should be kept away from the society in order to free himself from the menace of drugs, declared the magistrate. 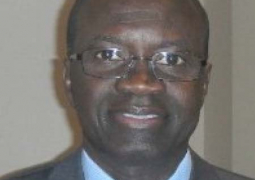