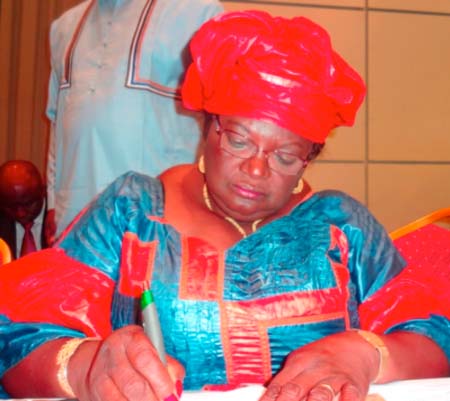 She was delivering a speech at the opening of the ministerial meeting on the Abidjan-Dakar Highway development project, held recently at the Kairaba Beach Hotel.

She expressed her gratitude for being part of a team of ministers and experts that have been assembled to discuss issues pertaining to the Abidjan-Dakar Highway Development programme.

She informed the meeting that a cardinal policy of their government under the leadership of H.E. Dr Ernest Bai Korama, with respect to road infrastructure, is to ensure that the reconstruction, rehabilitation and maintenance of the existing road network in Sierra Leone is carried out and sustained.

“This is in order to maximise the contribution of the road network to our national economic recovery programme,” she said.

In fulfillment of the above, various arms of her government and other key stakeholders are making “commendable efforts” with available resources to carry out the rehabilitation, maintenance and repairs of roads and bridges in the national network, she added.

“We are here to discuss the Abidjan-Dakar Highway Development programme, which forms part of the Trans-West African Coastal Highway. One cannot, therefore, overemphasise the importance of this project as it falls within the agenda of the government and people of Sierra Leone,” Madam Seisay said.

The Sierra Leone link constitutes five sections which are at different levels of development, she noted.

“I wish to bring to your attention the Makeni-Kamakwei-Madina Oula-Guinea Border Road, a project that is not part of our programme for discussion but one that is worth mentioning due to the fact that it is 100 per cent being funded by the Government of Sierra Leone, and the fact that it forms part of the international highway linking the Republic of Guinea to Sierra Leone via Madina Oula further north in Bombali district.

“That route, when completed, will enhance trade between the two sister nations and as such effectively serve the Mano River Union as a whole,” said Deputy Minister Kadija Olamatu Seisay.

She said the rehabilitation of her country’s national infrastructures, including the road infrastructures had been and would continue to be a priority to her government.

“That is why I am particularly proud and grateful that I am part of a forum where pertinent issues, geared towards road infrastructural development, will be discussed,” Madam Seisay said.

The deputy Minister thanked the ECOWAS Commission for facilitating the Dakar-Abidjan corridor.