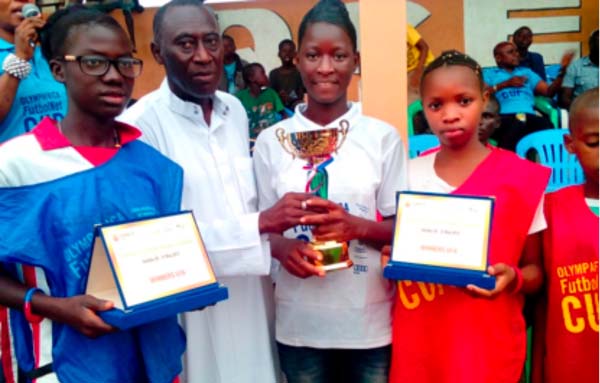 The Serekunda East-based Olympafrica Centre in Gambia on Sunday clinched both trophies of the International FUTBOLNET Tournament held in Banjul from 29 to 31 May 2015.

With each centre presenting two teams (U-14 and u-16), the tournament was staged over two days with competitions held in both morning and afternoon.

In a well-attended final, Serekunda East Olympafrica defeated Somone 2-1 on post-match penalty kicksin the U-14 categoryafter both team scored 7-7 points after assessment.

In the U-16 category, Serekunda East Olympafrica team beat Gandiaye Olympafrica 1-0 in the game and 8-6 points in the overall game.

Mansoa Olympafrica Centre of Guinea Bissau was voted as the best team that respected the six main values of the Futbolnet and they awarded Gold plaques in both U-14 and U-16 categories.

The competition was supervised by Coumba Marieme Ly, the assistant head of programmes of the Dakar-based Foundation Interenationale Olympafrica and Mr Oriol from Foundation FC Barcelona.

‘FutbolNet’ is a programme based on Futbol3 methodology, a tool for social intervention, never applied in Catalonia before, but with well-known successful experiences in Colombia and Germany.

It’s an innovative method to reeducate through sport and includes working with groups of young people on subjects like cohabitation, discrimination, gender, etc.

The key to ‘FutbolNet’ is dialogue. Through this tool, players (boys and girls) not only enter into a relationship of mutual respect and understanding, but also gain self-confidence and a sense of responsibility.

The project is put into practice in several cities of Catalonia, in collaboration with their councils.

The project beneficiaries are groups of children and young people aged between 10 and 16 years, selected by regional organizations that collaborate in the implementation.