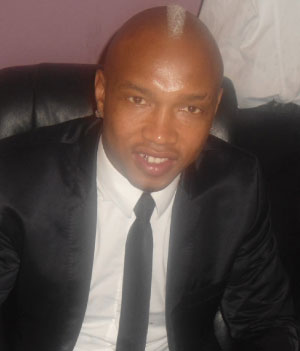 Senegalese superstar El-hadji Diouf has said he is extremely delighted to be invited by the Sports Journalists Association of The Gambia (SJAG) to observe the third edition of the annual Sports Journalists Award that took place at the Jerma Beach Hotel in Kololi on Saturday night.

The former Liverpool and Bolton Wanderers player, who is widely regarded as a controversial figure, arrived in Banjul on Friday evening alongside his comrades Khalilou Fadiga and Alasan Ndure, both key figures in Senegal’s \World Cup team that reach the quarterfinal of the 2002 World Cup in Korea and Japan.

They were in town to join the sports journalists in celebrating the annual Sports Journalists Award designed to honor sportsmen and women for their contribution to the development of sports in the country over the year.

Speaking to reporters at the Jerma Beach Hotel, where he was accommodated shortly after his arrival, Diouf, who plies his trade with the Scottish side Rangers, said he was absolutely delighted when he was approached by the sports journalists to grace this occasion.

“I am happy to come to The Gambia my home to celebrate this event with the Sports Journalists Association of The Gambia,” says Diouf, who also thanked the people of The Gambia for what he called their tireless support to the Teranga Lions of Senegal during the 2002 Fifa World Cup held in Korea and Japan where he led the impressive Senegalese team to quarterfinal becoming the third African country to do so after Cameroon and Ghana in 1990 and 2010.

His fellow countryman and one time inspirational figure with the Senegal’s national team Khalilou Fadiga also added his voice to the interview saying: “The Gambia and Senegal are one country and nothing can destroy the fruitful relationship that continues to exist between the two sister countries.”

Fadiga, whose football career was marked by some spectacular highs and dramatic lows, made a big money move to the Italian giants Inter Milan but his hope of making any impact was endangered by a heart problem, which ended his active football playing career.

He has established a foundation purposely to help recruit the continent’s young talents to foreign leagues and vowed to shift attention to The Gambia to help the country’s potential youngsters expose to higher football standards.