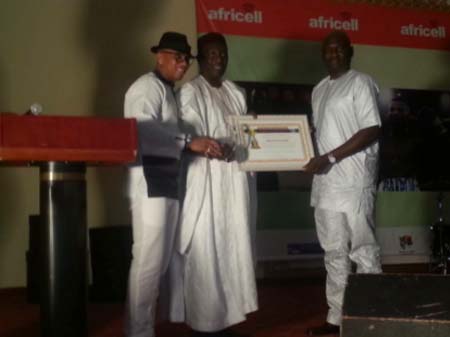 The Sports Journalist Association of the Gambia (SJAG) on Friday 22 April 2017 held its 7th National Sports Award and Gala at the Djembeh Hotel to celebrate and honour outstanding sportsmen and women of 2015 among others.

In his remarks, SJAG president Musa Sise said the sports award has become a national fixture in the country’s sporting calendar, adding that the event is meant to serve as an inspirational gathering, where youngsters will be inspired to become winners and high fliers.

Sise stated that since the inception of the award it has continued to gather momentum yearly by improving on the quality of the award, setting international standards in its recognition and delivery.

This is in line with the association’s desire to contribute to the attainment of excellence in sport, he said.

The SJAG president reaffirmed yet again, the association’s commitment to the nation: “Our role as an organ with the mandate to keep disseminating, educating and being that watchdog of the games, the men and women entrusted in their running.”

Mr Sise, who was recently in Doha, Qatar, with his Secretary General to attend the 79th AIPS congress where over 89 countries gathered at the invitation of the Emir of Qatar highlighted that, high on the agenda was the menace facing all sports, drugs cheats and corruption.

Corruption, bribery, unscrupulous administrators all driven by greed have plunged our games into disrepute yet still most of us remain in-denial, he remarked.

“Of late a lot has been reported on the dealings of the most trusted men running the most popular of sports in the world. We all had our views, opinions in our sporting periodical, some of us acted as conduits for others, whilst others continue to solicit favours from administrators in the maintenance of a peaceful co-habitation of some sort,” the SJAG president noted, saying the important thing to note is that The Gambia is not immune to this seismic catastrophe as others would prefer to call it.

As the association celebrates the efforts, contribution and achievements of the men and women, Sise urges members to reflect on the future of sport and the opportunities it presents.

“The avenues sport presents our youths remain countless and yet still it remains untapped,” he observed, noting that, sport and its development can provide the answer to youth unemployment, delinquency and the back-way menace it presents.

“League and nawetan teams have all been decimated by the desire of our youthful folks to jump on the dingy like ferry in crossing the Mediterranean in search of greener pasture,” he further said, adding that he is of the belief that men and women wishing to lead us into the next generation should be armed with vision and know how as to what the modern day sports administration requires.

As we continue to grow and become more ambitious, the need to be informed, trained and to acquire more skills and knowledge has become even greater, he added, saying the SJAG executive being aware of this necessity, was able to put two training programs with the support of the Gambia Press Union for most young broadcasters of the association but more remains to be done.

SJAG had over the years called for a concerted effort by all meaningful players in the country’s sport to seek, indulge and be committed to all genuine contenders in encouraging a positive drive for sport in all its forms as a catalyst in changing lives, he stated, saying “the economic benefits and the opportunities are numerous and we wish to encourage investment”.

Alh. Pap Saine Honourary Life President of the Sports Journalist Association of the Gambia, in his remarks, congratulated and thanked members of SJAG for the successful award, saying it is good to recognize excellent sports men and women.

Mr Saine also thanked all those that graced the occasion, saying their turnout is an encouragement to the association.

He appealed to authorities for their good collaboration between SJAG and Government in terms of cooperation, financial assistance and collaboration, noting that the association needs more funds to enable them continue the award.

He called on all media houses to be featuring local athletes more to give them the recognition and exposure they require.

The Point’s MD also urged media outlets not to be football bias, saying it is our duty to promote all sports in the country.

Saine, who has worked for CAF as Media Officer for a good number of years, described Omar Sey, who he has worked together with at CAF as having played a great role in African football.