The case was heard by Magistrate Kijera.

Prosecutors alleged that the accused persons, within the year 2012 and 2014 at Bakoteh in the Kanifing Municipality, being executive members of Gambia Scout Association, conspired among themselves to collect over D700,000 from various non-scout members with the pretext to include them in trips to attend international jamborees in different parts of Europe.

The bill of indictment further stated that the accused persons on the same date and place, obtained D700,000 from various non-scout members with the pretext to include them in trips to attend international jamborees in different parts of Europe.

The accused persons did not accept responsibility.

Prosecuting officer 2118 Gomez told the court that he opposed bail for the accused, adding that the matter is being investigated.

He said that if the accused were granted bail, they may tamper with the investigation.

He added that the accused could repeat a similar offence when granted bail, adding that the offence is serious.

He also said that the accused may interfere with the witnesses and urged the court to deny them bail until the investigation is completed.

Sergeant 544 Jaiteh, who was part of the prosecution team, told the court that by next week they would complete their investigation.

At this juncture, Magistrate Kijera asked the accused what they had in response to the prosecution’s submission regarding bail.

Ousman Jatta then told the court that with regards tampering with evidence, their accounts have been audited and their books have been closed.

He also said he is facing a similar charge and the case is being tried before Magistrate Gomez for the same monies on the same count.

He further stated that he is supposed to be at a training activity organised by the Ministry of Education, as a tutor to help upgrade the standard of primary school teachers.

He said he is a father of three children, with a sister and nephew and is also taking care of his old mother.

Mr Jatta stated that if he was not granted bail, he would not be able to fulfill those national and institutional responsibilities.

He added that he is a law-abiding citizen, and urged the court to grant him bail.

Amat Sowe said he was applying for bail because he was bailed before.

He adduced that he is a teacher and a father with his family, adding that his wife is pregnant.

Momodou Mendy revealed that he is a national commissioner on voluntary basis, adding that he is a head of section at the Gambia Technical Training Institute (GTTI).

He added that he is currently working on two national documents, and that he is the focal person for a project at GTTI.

He further stated that he is the breadwinner of his family, adding that he is a prosecution witness in a similar case.

He said he would make himself available whenever he is needed by the court.

Essa Jarjusey said he is a teacher by profession, adding that he volunteers in the Gambia Scout Association.

He added that he is the head of a department at the school where he is teaching.

He said he is a family man with a wife with six children, adding that he is the breadwinner of his family.

He stated that he would not tamper with the investigation, and would make himself available to the court.

Adama Beyai said he is a law-abiding citizen, adding that he has never committed any offence, neither taken to the police.

He adduced that he would not tamper with the investigation, adding that he was not arrested but walked into the police station.

He said he was in custody while it was his child’s naming ceremony.

Maimuna Bah said she is a teacher by profession, and is a student at the UTG which the government is paying, adding that the audited report has been submitted to the police.

She stated that she has never been accused of committing any offence, adding that she would not tamper with the investigation or evidence.

She said she is a married woman, taking care of a cousin who is in Grade 9, adding that she is a volunteer.

She said they have been detained for five days.

He subsequently granted the application made by the prosecution not to grant the accused bail, and remanded them in prison custody. 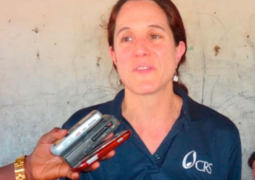