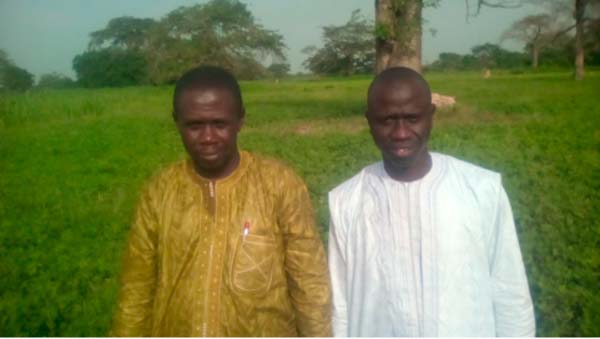 The Managing Director of the Gambia Ports Authority (GPA), Lamin Sanyang, and the deputy Minister of Agriculture, Ousman Jammeh, have given assurance of a better working relationship in the fight against food insecurity in the country.

“If everything is to go accordingly, all sectors should endeavour to join heads together and support the Ministry of Agriculture in its strive to attain self-food sufficiency,” the GPA MD said.

He made the statement at the end of the Deputy Minister’s tour at the Foni Jalokoto farm.

He stressed the need for all institutions to invest in agriculture, saying as far as his management is concerned, GPA as a sector would continue to support the Ministry of Agriculture in a bid to attain the President’s vision.

Mr Sanyang said considering the importance attached to the Ministry of Agriculture, there is a need for better relationship with institutions to work towards the development of agriculture.

He said no country would develop in the absence of agriculture, adding that people should therefore redouble their effort and devote themselves in the culture of farming.

The establishment of this farm was invented by his family members in line with the President’s Vision 2016 initiative, Sanyang said, adding that the farm now belongs to the district.

He praised the communities for their commitment and dedication to the farm, adding that plans are under way, in the next cropping season, to extend the farm from ten to twenty-two hectares.

The GPA MD also praised the deputy minister for visiting his district farm dedicated by his family members to the President.

He commended him for his commitment and dedication, saying institutions should support the ministry to realise the vision of the Gambian leader.

He said people should actively be involved in agriculture, as it should be everybody’s business, adding that this was why his family initiated this farm mainly to support the President’s initiatives.

The deputy minister expressed appreciation of the level of performance at the farm, which is cultivated by the communities of Foni Brefet and Foni Bintang, with the support of the family members of the GPA MD.

He assured the GPA MD that his ministry would do its best to work hand in glove with his communities, whilst he challenged the communities to continue the hard work.

He called on all and sundry to join the crusade in the drive to attain food security.

Also speaking was the permanent secretary at the Ministry of Agriculture, Falalo Touray, who encouraged the communities to continue to engage in agricultural production.

He thanked the communities for their hard work and commitment and said the ministry of agriculture would continue to support them.