Reigning champions Sifoe and Tanji are bracing up for Kombo South district’s biggest football jamboree in the memory of two household names in the district - late Kajali and late Ismaila Nyassi - this weekend at the Jambanjelly football field.

Sifoe and Tanji sealed a place in the final after their astonishing performance in the championship.

The final tie is set to attract thousands of football fans in Kombo South and its environs for the weekend’s biggest clash.

The champions, Sifoe, are currently embarking on massive preparations ahead of the Saturday’s district biggest football tournament final clash against Tanji physically and morally to keep them fit for the weekend’s battle.

Tanji are also preparing well for the Saturday’s final, as they are optimistic that they would beat the champions and claim the district’s biggest football fiesta title for the first time in their history. 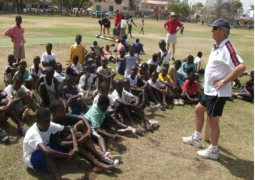