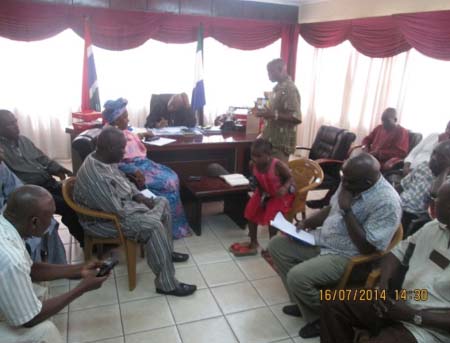 A cross section of members and executives of the Sierra Leone Nationals Union in The Gambia (SLENU) last Wednesday paid a courtesy call on Sierra Leone’s new ambassador to The Gambia, AMB Soulayman Daramy, at the Embassy’s Chancery in Banjul.

Speaking on the occasion, the chairman of the union, Sorie Koroma, said as citizens based in the Diaspora, it was befitting that they pay a courtesy call to congratulate him and pledge their support and cooperation at all times.

“Even before you presented your credentials, we have observed that you are really here to work in the interest of us based here and the country as a whole,” he said.

Chairman Koroma added that there are many Sierra Leoneans in The Gambia engaged in diverse fields of work, including as teachers, petty traders, nurses, footballers and mechanics, who are law-abiding and contributing to the economy and development of The Gambia.

“Mr. Ambassador and Deputy, we look forward to working with you and the Embassy staff in the interest of our country,” he said.

Responding, AMB Daramy expressed his thanks and appreciation for their visit, describing the gesture as “patriotism”.

He said during his meeting with President Yahya Jammeh, after presenting his credentials, he realized  President that “Jammeh holds our country in high esteem and promised his government’s support and willingness to work with the embassy”.

Ambassador Soulayman Daramy announced that the embassy has drawn up a work plan, and top on the list is the registration of all Sierra Leoneans residing in The Gambia. He said next on the list is to relocate the chancery from Banjul to the Kombos, where other embassies are located.

“Project wise” he noted “is to re-organize SLENU that comprises all other organizations in The Gambia to represent the interest of all citizens”.  He promised the embassy’s support.

Ambassador Daramy called for the free flow of information from SLENU to all members of the organization, and cautioned that the laws of the land must be obeyed at all times. “I am here to learn and copy and take back to our motherland what needed to be implemented.”

Paul Put on His New Contract