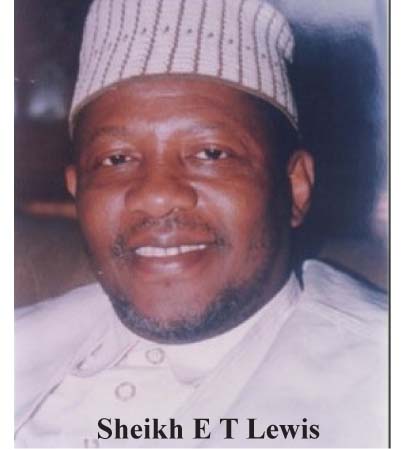 Born in Banjul on October 29, 1954, Sheikh E T Lewis was a man of: all people, all races, all creeds and all class. He lived his life positively impacting on many other lives in the Gambia and beyond.

But who was this gentleman of the finest character? Well, Sheikh Lewis was truly a man of the people. He had championed human rights in the Gambia and across the globe. He was one of the leading pro-poor human rights and development activists. He was a leader par excellence who offered selfless service to the poor, the marginalized and the vulnerable groups particularly children. He was intelligent, smart in both thinking and in appearance.

He was a founding member of International Society for Human Rights (ISHR) Gambia and Director of the Gambia office. He was involved in New Partnership for Development of Africa (NEPAD) activities in the Gambia. He was the founding member of Amnesty International (AI) Gambia. He was a member of the Rotary Club of Banjul. Sheikh was also the founder of Bakoteh-based Center for Street Children and Child Trafficking Studies and its library. He was the founding member of the Consumer Protection Consortium as well as other consumer rights groups. He was a religious man with a big heart. In short, there is hardly any serious NGO in the Gambia that did not see the participation of Sheikh ET Lewis in its setting up stages.

My first encounter with Sheikh Lewis was in 1998 when I was a young reporter at the Point Newspaper published by late Deyda Hydara and Pap Saine. Henceforth, Lewis would regularly grant me exclusive interviews at his then office situated at Gambia Christian Council along the MDI Road in Kanifing. For over a period of ten years, he would willingly talked to me on crucial and topical issues affecting the Gambia and Africa at the time, particularly those revolving around governance and human rights.

During my numerous visits to his office, I would see children with bare feet carrying begging pots walk into his office. I would see boxers, I would see religious people, business people, diplomats, politicians, senior government officials and virtually people of all sorts and classes would flock into his office looking for Sheik. Despite his busy schedule, he would have time for all these different classes of people with diverse backgrounds.

He spent most of his life and time defending the weak, the poor and the defenseless folks. Since the advent of 1994 military takeover in the Gambia and subsequently the entrenched dictatorship going with massive human rights violations and systematic dehumanization process, Lewis got busier speaking out against the many injustices and social ills which were the hallmarks of the reign of terror brought by the so-called 1994 revolution. I saw him, investigate, monitor and campaign against many difficult and different cases of rights violations.

He refused to be silent in the face of tyranny and malgovernance. Like the Nigerian literal giant and Nobel Prize for Literature Laureate, Professor Wole Soyanka, once said and I quote: “The Man died who kept silent in the face of tyranny,” So, Sheikh persistently struggled to survive the more than two-decades-long dictatorship and tyranny that the Gambia went through in the recent past.  In fact, Sheikh championed human rights principles of: inclusion, participation, equality and respect for the rule of law.

Sheikh, consistently defied dictatorship convinced that the logic of peace should prevail over the logic of violence. He spoke truth to power when many of his compatriots preferred to remain silent or look the other way.

I saw Lewis fiercely condemned and campaigned against the April 2000 massacre of innocent and peaceful protesting Gambian school children. I saw him bravely condemned the shooting of Lawyer Ousman Sillah, I saw him calling for justice in the December 2004 cold-blooded murder of Point’s former managing editor, Deyda Hydara and also I saw him campaigning for justice in the numerous killings of soldiers and other people that happened on Gambian soil.

Also, I saw that through Lewis’ personal intervention and activities many cases of wrongful arrests and detentions of innocent people were later resolved. Likewise, many folks eluded arbitrary arrests/detentions and kidnapping cases thanks to the efforts of Lewis. So, the list goes on and on but to save time we can just summarize on the life, times, activities of a fascinating and fantastic character of this man of all people of the highest order.  Of course, we all know that there was none and still no perfect human being on earth, but Sheikh Lewis was a near-perfect gentleman of the highest order who touched on many lives for good.

So, I call on all to pray for his departed soul, so that the almighty Allah will forgive him and grant him the highest stage of heavens, ameen.

Before I take leave of you, I will like to share with you three messages from just three individuals who knew Mr. Lewis:

Firstly, this was from one Lamin K Saidy who remarked shortly after Lewis demise: Child Protection Alliance Board Chairperson and The director of International Society for Human Rights, Sheikh Lewis was a renowned human rights activist who also championed issues of children within and outside the Gambia. He has served the Gambia with distinction... May his gentle soul rest in peace!

Then the second message was from one Mariama Saine who wrote birthday wishes to Sheikh Lewis on October 29, 2016.

It went like the following: Happy birthday Grandpa (Lewis was also fondly called).

Live longer for us to tap from you river of wisdom. Wishing you good health and long life.

And the last but not the least is from Omar Ousman Jobe and I quote: “Sheikh was always ready to confront injustice whatever the consequence. What struck me from the time I got acquainted with him was his temerity, his openness to new ideas, his willingness to go all out to support the vulnerable and marginalized people. He was a man with a heart of gold. At some point, when the unjust tried to ride roughshod over people, he was ready to “take a bullet for me. The amazing thing is that at the time, he did not even know me well. What Sheikh told his colleagues was: “we will all be accountable for our acts in the grave. Let us do the right thing and have peace. That was when I became so Sheikh Lewis attached. Today, he has departed this world. We pray that Allah Subahanahu watalaa grant him Jannah for all the good work he has done in the service of humanity,” end of quotes.

I thank you all for you kind attention.

NOTE: This was the statement delivered by Momodou L Jaiteh, the Secretary General of Consumer Protection Consortium (CPC) at the University of the Gambia where Sheikh Lewis was honored on Tuesday March 11th 2020 by The Gambia Consumer Protection and Competition Commission as part of activities marking this year’s Consumer Rights Day observed worldwide on March 15.